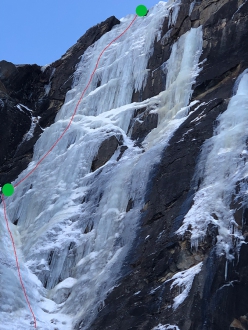 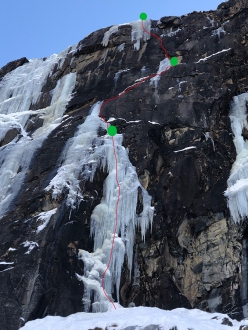 The start of the season was marked by lots of snow but not much ice. That’s what things were like in December, we were all motivated to climb ice but not many had formed. Alberto "Silver" Silvestri checked out all the usual icefalls to no avail, then we decided to approach Monday Money. As we reached the base of this classic drip we immediately noticed two large lines to the left of Repentance, one completely up ice, the other on mixed terrain, the type of thing we like, some ice, some rock, some more ice…

We looked at each other and wondered whether we should we give it a go or a miss? The little gear we had would only allow us to climb the first three pitches of Monday Money… at the end of the day we vowed to return before the temperatures rose. Two days later we met at the Valnontey car park at 6:00 am and were joined by our colleagues Rémy, Michele and their friend Roberto.

Things stated badly, a van from France had got there a few minutes before us and we realised we’d have to speed things up if we wanted to reach the base before them. We immediately forgot the cold of Valnontey, where the track branches off for the icefall Patri we caught up with the Frenchmen and then all of sudden we could take things more easily, they had their sights set on a completely different climb! We calmly ascended the long approach gully thanks to the track we’d beaten a few days earlier.

At the base we split, Silver and Roberto climbed up the left branch, Michele, Remy and myself headed right. Our climb was comprised of three pitches; Rémy started up vertical and thin ice, each whack of his ice axe sounded hollow, soon though he got onto better ice and managed to establish a belay with two bolts. I climbed the second pitch, starting up a slender smear that gradually got smaller and smaller until it disappears on a smooth slab. I was faced with two options: back off or place three bolts to reach the stepped terrain to the right. I didn’t think twice, retrieved the drill, placed the bolts and reached the section of frozen turf. From here I traversed, past ice then rock, to reach a ledge and establish our second belay.

Michele led the last pitch, even more vertical, up ice at first, then rock that took trad gear, before reaching the last slender drip of ice and complete this beautiful mixed line next to the famous Repentance.

While we were focused on our Daddy Cool (in memory of a dear friend of ours) Silver and Roberto established Sputnik, a beautiful, four-pitch line of vertical ice. A first easy-angles pitch led to the base of the 50m wall of ice. Two other pitches, the first rock the second mixed, led to the top. All in all it was a great day with fellow mountain guides from Cogne, before the "cold" season gets into full swing. Or so we hope!