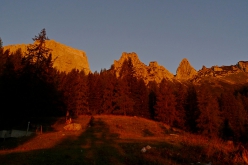 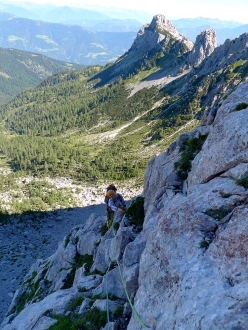 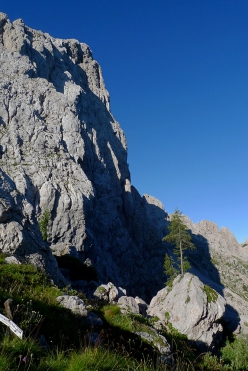 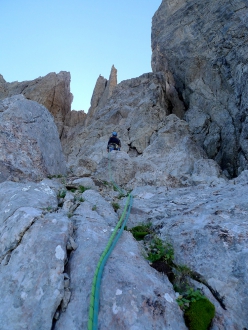 On 20-21/08/2020 Czech alpinist Michel Coubal and his daughter Anna Coubalova made the first ascent of The Hour Between Dog and Wolf, a new multi-pitch climb up the north face of Trogkofel / Creta di Aip, Carnic Alps, Italy.

"You are full of surprises, Master Baggins" Thorin’s quote fromt The Hobbit by J. R. R. Tolkien is ringing in my ears. This wall has also been one big surprise from the very first day. In July, when exploring the wall from every possible angle, we suspect it is going to be a tough one. After eight hours of hammering in pitons and practicing the moves, I manage to get through two twenty-five meter pitches. The rock is fantastic quality but it very rare to find a good piton placement. Again, there are sections where the pitons are only partially driven in. I feel like I am going crazy. I have cramps in my hands and Aja has lost feeling in her legs after sitting in the harness for four hours. We decide to get down. Hopefully, we will have new energy tomorrow, we will get through this part and continue up.

Aja and I are sitting in our sleeping bags and gorge ourselves on goulash. I remember my old friend Kujan, a legend of post-war sandstone climbing.

In the mid-1980s, Kujan suffered from a health condition and had to have heart treatment. But he was a great fighter. He used to a wear chest harness even at nights, in order to get used to the pressure when climbing. Once he was ordered to spend some time in a spa, but he was bored out of his mind. That is why my brother and I decided to save him. We gathered some climbing clothes, a mat and a sleeping bag I’d just finished sewing and we basically kidnapped him from the sanatorium, saying that we needed to visit an old, ill friend. During those two days, we longed for nothing. We had sandstone towers, a guitar by the fire and even roasted sausages. As we were laying around in the morning, he told us that he felt ten years younger and asked us whether we spilled goulash in his sleeping bag, because he smelled it all night. Back in the sanatorium, he looked like a respectable patient again, whose seriousness was disrupted only by the unmistakeable smell of fire.

The middle parts of the wall are a bit more pleasing to the eye. The seemingly more compact slabs are interlaced with uninterrupted cracks. But when I join Aja at a stance, I understand her hesitation. The rock is partly formed by small slabs wedged into one another and they sound like a bell when we tap them with a hammer. Fortunately, the climb is not that difficult, but we are using only slings and friends.

I know the ringing sound, it reminds me of the north face of Triglav that we traversed in 1986 under the edge of Sphinx. On a small saddle behind the tower, thatwith its size would put any Czech sandstone area to shame, I suggest to my brother that we sit down for a while and drink something. "Let’s walk a bit further," he replies. And then, twenty minutes later, we are sitting and looking back. The whole tower is beginning to move and with a terrible roar it collapses and vanishes in the valley below. Once the cloud of dust disappears, there is no sign of a tower.

We see the last tower above us. From the monolithic wall of the "cathedral", which is just below the peak, it is divided by a chimney. We discuss the option of climbing the edge of the wall formed by slabs visible here and there, or the chimney itself. I reckon we’ve had just enough adventure. After all, I am a former sandstone climber and a chimney is a safe bet. The view of the final part of the chimney reminds me that before I took on climbing, I was a highly active caver. But in the caves, we climbed down first and then up again using a rope. It cannot be more than twenty meters high. Slowly, I move to the edge of the overhang. Everything is moving here. If I managed to place a friend, I could swing above it. But the friend slips from my hand and I fall. I yank out all the anchors, only to be caught by the one below the overhang. Under that one, there is only one piton and a very poor belay where Aja is cowering. Something hits my teeth and a part of my front tooth is suddenly missing. I had hoped I would never live through this again. I turn my brain off, and I try again.

The summit of Creta di Aip is gorgeous. It is like the plateau from The Lost World, raised high above its surroundings with marvellous views all around. This moment is almost always worth it. All it takes is packing not only the required gear, but also a big chunk of luck.

11.09.2019
Avostanis, rock climbing above an enchanting lake in Italy Carnic Alps
Attilio De Rovere introduces the beautiful crag Avostanis in Carnia (Friuli Venezia Giulia, Italy). With more than 120 sport climbs and a handful of multipitch routes, this cliff is ideal for all those who climb from 4b to 8b. Avostanis will also host the historic Arrampicarnia climbing meeting from 14 to 15 September 2019.