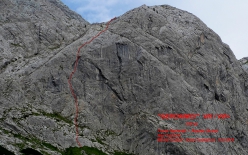 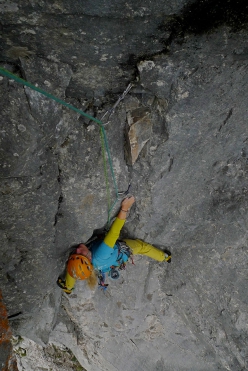 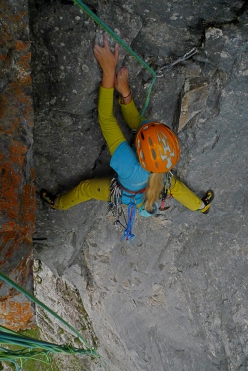 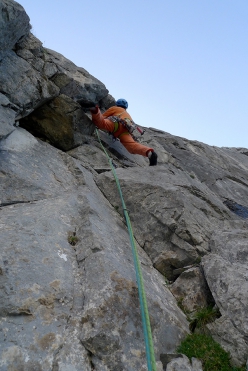 Czech alpinist Michal Coubal and his daughter Anna Coubalová have established Geronimo, a new multi-pitch climb up the West Face of Torre Spinotti ( Coglians - Cjanevate) in the Carnic Alps, Italy.

I am taking the rope in and trying to find a position that’s a bit more comfortable. The belay station is formed by a block on the edge of an overhanging corner capped by an overhang. Over my shoulder, I’m watching the sky darkening across the valley below us and the curtain of rain as it approaches.

Ája cleans the belay and starts beating the pitons out of the rock. In the gusts of wind, the slings of the rope thrown over my harness rise around me like snakes and disappear above the overhang. The rain has just arrived. I press against the wall and cast my mind back, once again…

The spring of 1988 cannot by forgotten. It has been 14 days since my brother Mirek and I set up a camp in the San Lucano valley, below the hypnotizing south face of Terza Pala. Apart from short breaks, it rains continuously. Here come our Slovak friends, Fero and Jaro, who went to see Lago Magiore for a few days. The weather is nowhere near climbing Terza Pala, but we are not giving up so easily. On a grey day, we start the climb up to Lastia di Gardes. In the morning, there is no rain, but at noon, it starts. We climb on and, late in the evening, we find a small ledge with an old, dry tree. Fero starts a little fire and we huddle next to it till morning. This is the only time I have ever spent the night by the fire during a climb. And it continues to rain, incessantly. On the second day after the descent we assess who’s feet are the most pruney.

All it takes is a look over to the other side of the valley. A few years later, we would be spending our 3rd night on the north face of Agner during our first ascent of what we called Neverending Story. We pitched our small portaledge on a narrow ramp. The night storm brought lightning as bright as day and filled the whole ramp with water. We were sitting in our tent and the groundsheet was blowing up like a balloon due to all the running water. We were yelling at each other but through the constant rumbling of thunder, we couldn’t hear anything anyway and I just hoped I had glued all the seams properly before coming here.

It’s late at night on our last night on Javorová věž in High Tatras, when my brother and I crawl into our sleeping bags. There’s a wide, smooth corner and we are just a few meters below the summit. The storm that arrived suddenly raged on until morning. Then, it seamlessly transitioned into a snowstorm and turned our sleeping bags into heavy, soaked objects. I looked down and, for a while, wondered whether I should throw it all down or not. The route was immediately named the "Ninth Wave".

After all those experiences in the mountains, I wanted to start differently with my daughter Anna, to show her the mountains from the better side. During our first ascent up Kolový štít in the High Tatras, the weather was supposed to be sure-fire, guaranteed by the infallible Norwegian forecast. To this day, we remember my utterance: "Had I not known that the weather is supposed to be so beautiful today, I’d say that it’s going to rain within an hour." And after half an hour, we were huddling together under a slightly tilted spire trying to hide from the downpour. This storm, too, played all its trump cards and in the evening even some rocks started to fall.

This time, Ája couldn’t get the last piton out. She climbed to me, pressed herself to the ceiling and pierced her eyes through the rain behind us saying just: "Again?" We recoiled the ropes and I rearranged my gear for the second time. I remembered Aragorn’ words din Tolkien’s trilogy Lord of the Rings, while addressing a handful of his followers at the gates of Mordor: "No one dies today." But then, I thought of something better. I unclipped from the belay and set off to battle my way through the last overhang. "Geronimo!"

11.09.2019
Avostanis, rock climbing above an enchanting lake in Italy Carnic Alps
Attilio De Rovere introduces the beautiful crag Avostanis in Carnia (Friuli Venezia Giulia, Italy). With more than 120 sport climbs and a handful of multipitch routes, this cliff is ideal for all those who climb from 4b to 8b. Avostanis will also host the historic Arrampicarnia climbing meeting from 14 to 15 September 2019.