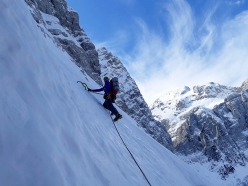 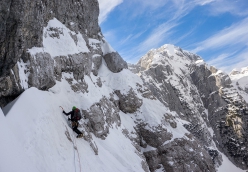 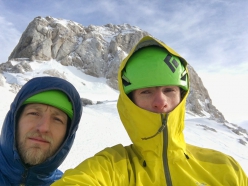 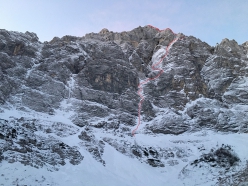 On the North Face of Triglav, the highest mountain in Slovenia, Matej Balažic and Marjan Kozole climbed Za prijatelje, For Friends. This combination of four summer rock climbs transforms into a logical winter line circa 1000m high and was climbed with one bivouac from 15-16 February 2020. This is probably the first time the combination has been climbed as a winter route. Balažic and Kozole report.

This winter has provided us with very little snow, but with excellent climbing conditions that persist virtually throughout the season. Short and easy approaches due to passable roads, low avalanche danger, dry approaches without potholing through deep snow... In short, good conditions for big walls.

On 15 and 16 February 2020 we climbed a mixed combination of routes on the North face of Triglav. For Friends (V/M5+, 90+°/70° - 80°) is a pretty logical winter line, which was accompanied by exceptionally good snow conditions that we’re having this year. It basically consists of at least four rock climbs and this is probably the first time this combination in winter, hence our decision to give it a name. We dedicated it to all our climbing friends who are no longer among us.

The idea was Matej’s and he’s been eyeing the line for a few years. So on the morning of February 15, we stood at the base of the Skalaška Route. Matej was the driving force of the team, which does not mean that he was getting all the difficult pitches, though ;-). As usual, we played rock paper scissors to decide who would get the first lead.

The direct start to the Skalaška Route (called Čez sodčke in Slovenian) provided serious but beautiful climbing. The first pitch took a good two hours and, truth be told, we were a little sceptical whether we’d be able to climb the planned line. But then things started to go our way. After the Skalaška Route we continued for two steep pitches and headed right to get to the Zlatorog Ledges.

Not too difficult but exposed and awkward climbing took most of the day, so we continued to pitch the climb almost all the way to the Zlatorog Ledges. We then coiled the ropes and continued along logical snow-covered passages towards a route called Stajerski steber (Štajerska pillar). There was not much easy terrain and most of it was between 70° and 80°. The snow was very hard and often icy. The conditions were great most of the time and the climbing was thoroughly enjoyable.

At dusk, after eleven hours of climbing and with tired calves, we reached a bivy spot which turned out to be pure luxury, a 10 by 15 meter cave in the middle of the wall. A truly amazing place to sleep where more than ten people could easily spend the night. Some cooking and modest eating followed, because we had forgotten some of the food at home ;-).

We slept for a long nine hours, and at about 5 o'clock in the morning, put on a brew and started to sort our gear. At first light Matej sprinted up the wall above the bivy. Extremely good snow conditions allowed us to continue unroped up the Stajerski Pillar. We had both already climbed on this part of the wall in summer, so route finding did not present any major problems.

After about 200 meters of beautiful, exposed climbing, we joined the Prusik-Szalay Route, where we tied in once again. This was followed by a number of beautiful, mostly dry pitches up to UIAA grade V to the top of the North Face of Triglav, where we topped out at 2.30pm on the second day of our climb.

We still had the descent ahead of us, which turned out to be relatively straightforward in terms of route finding as we both know the mountain very well, but it still required a lot of concentration. Crossing the exposed Kugy Ledge took us an hour and a half, and we were able to relax a bit on the remains of the Triglav Glacier. To get to the Vrata Valley we chose to descend the Prag Path which was quite icy, especially in the lower part, so we had to stay focused until the very end. After a good 39 hours, we concluded our wonderful two-day adventure on Stena, the north face of Triglav.

20.01.2015
Triglav and Travnik, important winter ascents in Slovenia by Mrak, Vukotič and Marčič
From  23 - 26 December young Slovenian alpinists Matevž Mrak (23) and Matevž Vukotič (24) made the second winter ascent, and first ever from the base of the face, of one of Slovenia’s most famous routes, Obraz Sfinge on the North Face of Triglav. They did so by climbing the Prusik - Szalay route, for an outing graded VI, M6+ R, AI4, VII- A1 (1000m, 1600m total length ). On 10 January 2015 Mrak, Vukotič and Nejc Marčič (29) made the second winter ascent of the Sveča route (VII- M, 800m) on Travnik in an 18-hour push. Matevž Mrak provides the details.

17.02.2011
Triglav, hard winter ascent in Slovenia by Grmovsek and Krajnc
Interview with Andrej Grmovsek who over a three day period in January and February 2011 carried out an extremely important winter ascent up the North Face of Triglav (2864m) together with fellow Slovenian alpinist Luka Krajnc: Sanjski Joža (VI/V,M7+, 1050m).