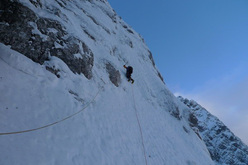 Andrej Grmovsek on day 1 on the first section of the route: three beautiful pitches of steep climbing on hard-packed snow.
Photo by Luka Krajnc 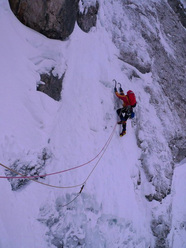 Luka Krajnc climbing the steep and delicate section low down on the route on day 1.
Photo by Andrej Grmovsek 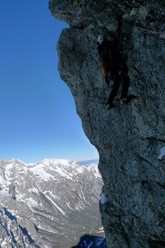 Andrej Grmovsek on notorious traverse on the headwall with its super tricky exit to small snow ledge. This is where Pavla Jesih was rescued in 1945.
Photo by Luka Krajnc 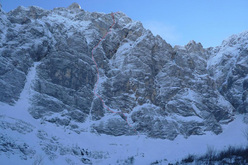 Triglav, hard winter ascent in Slovenia by Grmovsek and Krajnc

Interview with Andrej Grmovsek who over a three day period in January and February 2011 carried out an extremely important winter ascent up the North Face of Triglav (2864m) together with fellow Slovenian alpinist Luka Krajnc: Sanjski Joža (VI/V,M7+, 1050m).

Conditions in the low lying Slovenian Alps are infamously fickle, but this winter is proving to be one of the best on record, resulting in a flurry of interesting ascents which we will analyse in detail in the next couple of days. Probably the most important of all is the winter ascent of "Sanjski Joža" by 37-year-old Andrej Grmovsek and 24-year-old Luka Krajnc: climbing in alpine style, the two needed a total of 33 hours spread out over three days (30/01 – 01/02/2011) to get to grips with this very direct line up the kilometer high North Face of Triglav, the highest peak in the country.The line followed by the Grmovsek and Krajnc weighs in at VI/V, M7+, 1050m and is in fact a combination of three existing summer routes. Their winter outing  has caused a stir since it now ranks as one of the hardest winter climbs in Slovenia. In this exclusive interview, Grmovsek sheds some light on the ascent and on the highest peak of the Julian Alps.


Andrej, what can you tell us about the route?
The route we climbed on Triglav is not a new route but it shares more or less the ground of the combination of three existing summer rock routes. This is because the North Face has more than 100 rock routes, almost everything has been climbed before in summer. But in winter it is a completely different story and the combination we chose is a totally obvious winter line which follows a couloir/crack system straight from the bottom all the way to the top.
Can you give us more details about this combination?
The first section we followed is the summer route Skalaška (summer V+), the second is the rarely repeated Varianta Fajdiga-Pintar (a summer VI), while the top section is the famous Čopov steber (a summer VI+). This is the most famous climb on the entire North Face and it marked an important moment in Slovenian climbing: it was first ascended by Joža Čop and his Paula Jesih. They climbed the route in 1945, right after the Second World War and needed 5 days to complete the climb. Paula was involved in an epic rescue just beneath the summit and the time it was the hardest climb in Slovenia. It's a historic route, a summer classic which I repeated a few years ago. I knew that the rock was good for dry tooling and the line in its entirety was obvious. The idea had been in the back of my mind for a while, but it wasn't until this winter that I decided to give it a go.

Knowing that it might be very hard indeed...
I knew it could be hard, perhaps harder than all the other winter climbs in the Slovenian Alps. I have to say that we were very lucky with conditions. Most of the route was covered in steep snow, except for the circa 300m high headwall which is mostly rock, although some small ledges are covered in spindrift. Ice axes and dry tooling proved the best solution for these conditions. In bad conditions, it would have been much much harder.

Had any of the route been climbed before in winter?
Yes, Skalaška is climbed every few winters, and even Čopov steber was climbed in winter as early as 1968 (Kunaver, Belak, Sazonov, during an epic 8 day ascent). Čopov steber was even climbed free in winter by the late Janez Jeglic and Miha Praprotnik in rock shoes in winter of 1993. Conditions then were obviously completely different than this winter.

How did the climb go?
We spent the first night in the bivy hut 45 minutes from the wall, then started climbing in dark at around 5.30am and spent another two nights on the wall, at the top off pitches 12 and 23. We climbed it all free, no aid at all, which in winter is an important detail. The main difficulties were connected to the steep snow on the lower sections: although the climbing wasn't super hard, it was dangerous. Finding solid protection was difficult and we spent a lot of time searching for rock pro beneath the snow, which on the Triglav limestone is hard to find. I'd say that perhaps 1/2 the time was spent searching and placing gear, and this is of course totally different to most climbing in the Western Alps, where you can simply place a good ice screw and continue upwards.

So it was a mix of daring climbing low down and hard technical climbing up high.
Yes, the first 2/3 of the route was mostly snow, some 90° section, a lot of 80°. The upper section then presented us with mixed climbing and although it was technically the hardest, mentally it wasn't seeing that there were many pitons placed in summer.

Did things go according to plan?
We thought we might be slightly faster but we nevertheless prepared for a second bivy on the wall. In the end we spent 3 full days on the route and this was because we decided to it as safe as possible. We always set up good belay anchors and this slowed us down considerably. One could climb the route quicker, but it would be very dangerous indeed.

Did you reach the summit?
No, we stopped after topping out on the North Face. The summit is actually quite close, only about 200m higher and we could have continued but it was getting dark and the mountain hut was on the other side. With more time on our hands it would have been nice to continue, but we opted to go directly to the hut and this was a good decision since we had some problems crossing a steep section to get to it. The next day we descended without further difficulties via the normal route, it's a fairly steep descent but it went well.

How were the other nights on the wall?
We had taken sleeping bags with us and a stove, and the great thing about the North Face of Triglav is that there are many roofs and holes to dig into. The bivies were good, and this makes the entire experience quite different from say my ascent of No Siesta on the Grandes Jorasses, where the bivies are poor.
How does the face compare with other peaks?
Compared to other mountains in the Alps it is quite low, circa 2800m. This much lower altitude means conditions vary considerably and sometimes good conditions can be found even if the temperature is not so low: if it warms just right the snow becomes packed hard and you can progress well. If it is too cold the snow doesn't stick and it becomes useless. I'd say that climbing here is very different to the rest of the Alps and the only mountain I know which is similar is the Eiger, with its loose rock and similar tricky snow conditions.

Triglav holds a special place in the heart of all Slovenians...
Yes, it's an important mountain for us Slovenians. It is the highest mountain in the country, a national symbol depicted on our flag and also a coin. Our people identify themselves with this mountain. All climbers, all mountaineers grow up wanting to climb the highest wall in the country and being circa 1000m high it is also one of the highest in the Eastern Alps. The rock quality is good in some parts, and terrible in others.
A perfect stepping stone for the grander faces...
Yes, Slovenian climbers train here regularly both in summer and in winter.

What other winter climbs have been carried out on Triglav?
To the left of our line there is a huge couloir, this is a really famous winter, mostly snow, climb called Sanjski ozebnik – the dream couloir. It was climbed free only once before, by Marko Prezelj over two days in 2003 together with the Frenchmen M. Pellisier, F. Savary and T. Fauchner, he graded it  VI/V+,M7. As I mentioned earlier, conditions this winter have been exceptional and the route has now been climbed regularly, it was even soloed in 3.5 hours by Dejan Koren, another young talented Slovenian alpinist and this year the one M7 pitch is basically only packed snow. This just goes to prove how important conditions are, and on our climb I'd say we got really lucky. It wouldn't have been possible in a different winter.

Last question, since our Slovenian isn't the best... what does the name refer to?
Sanjski Joža means Dream Jož, a tribute to Joža Čop who carried out that important climb back in 1945.