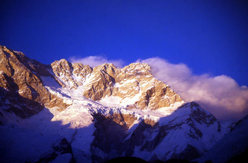 Five mountaineers have lost their loves on Kangchenjunga in the Himalaya: the Hungarians Zsolt Eross and Péter Kiss, Park Nam Su from Korea and two Sherpa, Phurba Sherpa and Bibach Sherpa.

Dramatic moments on Kangchenjunga, at 8586m the third highest mountain in the world, where at least 5 alpinists died between 20 and 21 May while descending from the summit.

The news was broken, yesterday, by Spanish website Desnivel, while this morning the magazine managed to get in touch with the 74-year-old, veteran Himalayan alpinist Carlos Soria who had abandoned his attempt at 8300m after realising that he had fallen behind schedule. According to the first information seeping through, 11 alpinists managed to summit Kangchenjunga but during the descent, for reasons yet to be confirmed, 5 perished.

The victims include the Hungarians Zsolt Eross and Péter Kiss who, after having summited at 18:00 (local time) were forced to bivy at 8300m and unfortunately they failed to return to Camp 4 the next day. Furthermore, Phurba Sherpa and Korea's Park Nam Su are said to have lost their lives, as well as Sherpa Bibach who was part of an Italian expedition led by Mario Vielmo. The alpinist from Vicenza reached the summit on 20 May, without supplementary oxygen, and is now safely back in Base Camp along with climbing companions Annalisa Fioretti and Silvano Forgiarini.

The situation on Kangchenjunga has been rendered even more dangerous, complicated and confused by an avalanche which hit Camp 2 but details of this, and all the rest, are still imprecise.