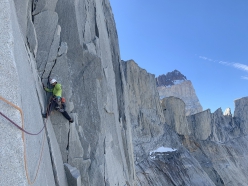 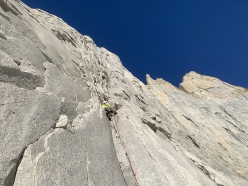 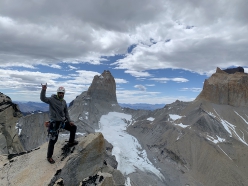 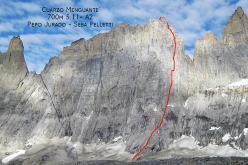 On 27-28 January 2022 Pepo Jurado, Sebastian Pelletti made the first ascent of Cuarzo Menguante on the East Face of La Hoja in the Bader Valley in the Torres del Paine, Patagonia

Hot on the heels of their successful first ascent of Cuerno Este in the Torres del Paine massif in Patagonia with Romano Marcotti, Pepo Jurado and Sebastian Pelletti have now completed an interesting new line up the East Face of La Hoja, or The Blade in English, above the Bader Valley, formerly referred to as Pingo Valley.

As reported, Cuerno Este was initially only backup plan as the original objective -La Hoja - had been wet but when this dried out Jurado and Pelletti made their way up into the valley. On 27 January they started up the first pitch of Anduril, before deviating right and following an obvious system of cracks. The pair made good progress despite the sustained nature of the climbing, but nevertheless they were forced to bivy about 5 pitches from the ridge. The next day the reached the ridge and followed this to summit at about 13, before descending down Anduril.

Writing to planetmountain.com directly from Chile, Pelletti explained "The ascent was incredible, nails climbing and a lot of route finding was necessary to put the line together. At one point I aided up a small seam as the crack system sealed up. From a small ledge here we made a tension traverse right into another system which we continued upwards. Night fell a few pitches short of the ridge, and we laid out our ropes to sit on, shivering through the night watching an eternal sunrise before starting up again and reaching the ridge at midday the next day. At the ridge we were forced to traverse around the west face to reach more accessible terrain to the summit. From here we rapped straight down the American line, replacing their anchors."

The 700m line checks in at 5.11+ A2. As to the name, Pelletti explained "Pepo named the route Cuarzo Menguante, as the "menguante" or waning moon accompanied us on our tiny quartz laden bivy ledge as we waited for the sunrise." Success follows a previous attempt by Pelletti and Alex Alborñoz via a different line circa three years ago.

Cuarzo Menguante is only the third route on the mountain's east face. Bohemian Rhapsody was established in 1996 by a Chilean team comprised of Christian Oberli and Sven Bruchfeld, while a month later the Americans Scott Lazar, Micheal Pennings and Cameron Tague made the first ascent of Anduril slightly further to the right.

28.01.2010
Hansjörg Auer and Much Mayr add new route to Torres del Paine, Patagonia
Hansjörg Auer and Much Mayr have recently returned from their trip to Patagonia where despite terrible weather conditions they managed to forge "Waiting for Godot" (750m, 7b) along the East Face of Central Tower to the Col which separates the Central and North Tower.

18.07.2000
Trekking in Patagonia
Trekking in a magical and mysterious land: three magnificent walks around the Torres del Paine, Fitz Roy and Cerro Torre, the stone heart of Patagonia.