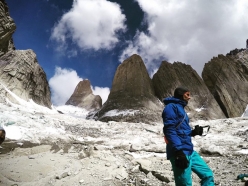 Nicolas Favresse below the East Face of Central Tower of Paine, Patagonia, where together with Sean Villanueva O'Driscoll and Siebe Vanhee he made the first free ascent of 'El Regalo de Mwono'. The climb was established between 1991/1992 by Paul Pritchard, Simon Yates, Sean Smith and Noel Craine with difficulties up to VI, 5.10, A4.
Photo by Siebe Vanhee 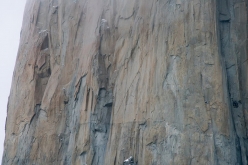 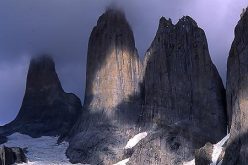 Torres del Paine, Patagonia, Chile, seen from the Mirador. From left to right: Torre Sur, Torre Central, Torre Norte. The North Tower was first ascended on 27/12/1957 by an Italian expedition led by Guido Monzino. Torre Central del Paine (2460m) was first climbed by British mountaineers Chris Bonington and Don Whillans via the North Ridge (VI, A2 600m) on 16/01/1963. The next day the Italians Armando Aste, Vasco Taldo, Nando Nusdeo, Josve Aiazzi and Carlo Casati made the second ascent of the mountain, climbing via the same line. On 9 February 1963 the Italians made the first ascent of the South Tower.
Photo by Nicholas Hobley

After spending 19 days climbing the East Face of Central Tower of Paine in Patagonia, Nicolas Favresse, Sean Villanueva O'Driscoll and Siebe Vanhee completed the first free ascent of 'El Regalo de Mwono'. This 1200m big wall rock climb was established between 1991/1992 by Paul Pritchard, Simon Yates, Sean Smith and Noel Craine with difficulties up to 5b, VI, 5.10, A4.

We mentioned them just two days ago when we broke the news about Mayan Smith-Gobat and Brette Harrington’s attempt at freeing Riders on the Storm up the Central Tower of Paine in Patagonia. And now Nicolas Favresse and Sean Villanueva O’Driscoll are back on the agenda, this time together with another strong Belgian climber, Siebe Vanhee; the trio has just spent almost a month on the same Central Tower, on its same magnificent 1200m high East Face, not on Riders though but on a route immediately to the right, namely El Regalo de Mwono.

This huge big wall rock climb had been initially attempted twice by a Spanish team, then first ascended between the end of 1991 and the start of 1992 by the Brits Paul Pritchard, Simon Yates, Sean Smith and Noel Craine who graded the line British 5b, VI, 5.10, A4. Fighting against what many have described as the worst mountaineering season in Patagonia for many a year, the expert Belgian expedition has managed to free all the pitches. This success joins another free ascent on the same face, namely the nearby South African route, freed in 2009. While waiting for greater details, here’s the first fragmentary information published by the team.

We finally made it back to civilisation;-) The Patagonian gods were very tough on us this time! Although we had planed for a maximum of 15 days of autonomy on the wall, 4 days extra was necessary in order to send free the last link to the complete team free ascent of the route and let relentless storms pass while waiting in our portal edges to go down. We completely ran out of food and were put to a true suffering test.

On the other hand “El Regalo de Mwono” is an exceptional route with such amazing pitches of splitter cracks and perfect dihedrals that it really motivated us to push our limits in order to free them even in very tough conditions. Out of 19 days we had only about 3 half days of good weather. The rest of the time we made very slow progress while fighting with snow storms and raging winds. It was a real team effort!

Although all of us have never been so skinny, the team is all good and healthy enjoying the comfort of civilisation while working on putting some fat on our bones. Life has never been so FAT! This was a true adventure!!!

Good luck to Siebe Vanhee and Sean Villanueva O'Driscoll who are moving now to El Chalten for hopefully more action in the mountains meanwhile I’ll see what’s possible to do in the Alps.

Thanks to Paul Pritchard,Simon Yates, Sean Smith and Noel Craine for having the vision to open this magnificent route in great style, to the guides of the hotel "las Torres" (Eduardo, Sofia, Javier and Paula) who helped us a ton with logistic and to Drew Smith for this great shot!
If you look well at the picture you can see our ledges mid way up the wall.