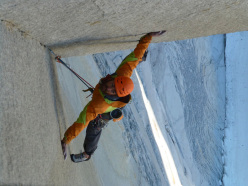 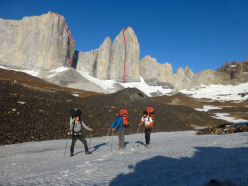 Merlin Didier, Stephane Hanssens and Sean Villanueva O’Driscoll and the routes they freed: on the left the East face of Cerro Cota 2000 (500m, 7c+), on the right the East Face of Cerro Catedral (1000m, 7c+).
Photo by Villanueva archive 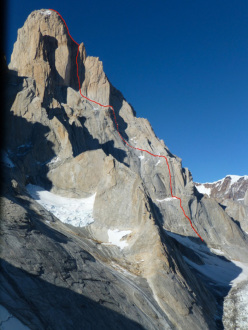 The line climbed by Stephane Hanssens and Sean Villanueva O’Driscoll up the North West Face of Fitz Roy.
Photo by Villanueva archive 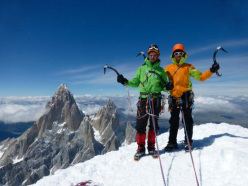 Stephane Hanssens and Sean Villanueva O’Driscoll on the summit of Cerro Torre.
Photo by Villanueva archive

In Patagonia the Belgian alpinists Stephane Hanssens, Merlin Didier and Sean Villanueva O'Driscoll made the first free ascents of the East Face of Cerro Catedral (1000 m, 7c+) and the East Face of Cerro Cota 2000 (500m, 7c+) while on Fitz Roy they climbed 900m of virgin ground up the NW Face. An "absolutely amazing adventure" as Sean Villanueva O'Driscoll recounts.

A small, highly experienced team of Belgians comprised of Merlin Didier, Stephane Hanssens and Sean Villanueva O’Driscoll spent part of this austral summer in Patagonia where it came up trumps with a series of impressive climbs, above all in the Torres del Paine region where the three made the first free ascent of Los Fabulosos Dos, a free variation to La Escoba de Dios up the sheer East Face of the Cerro Catedral (1000m, 7c+) and the first free ascent of the Italian route up the nearby East face of Cerro Cota 2000 (500m, 7c+).

In stark contrast to busy El Chalten, the trio spent the entire month alone, shunning contact with outside world and relying on their instinct and experience only in seizing the right moment. With routes under their belt such as Riders on the Storm in 2006, the South African Route in 2009 and the inspirational on-sight of Fitz Roy's East Face in 2011 to name but three, evidently their experience is second-to-none.

Before concluding their trip the three also returned to the Fitz Roy massif where Hanssens and Villanueva climbed a 1800m line up the North West Face of Fitz Roy, 900m of which covered new ground. Add to this what is likely to be the first Belgian ascent of Cerro Torre via the Ragni Route in January and it's easy to comprehend why they describe this season as "magical".

Stephane Hanssens, Merlin Didier and I had an amazing time in Torres Del Paine! We spent almost a month, from 14 January to 12 February 2013 in the French Valley, living in a cave and climbing. During that time we did not see anybody except for once, when we went down to the ranger station to ask for a weather forecast, the rest of the time it was just the three of us. We didn’t have any weather forecast to go by, so it was exciting trying to guess what the weather was going to do and try and listen to our instict about if we should climb or not...

We free climbed two routes of exceptional quality, it was truly magical! The first route was the first free ascent of the East face of Cerro Catedral (1000m, 7c+), finishing off a free-climbing project called Los Fabulosos Dos, a variation to the route La Escoba de Dios (John Catto, Charlie Fowler, Peter Gallagher, Max Kendall 1992, 5.10 with some sections of A4 aid) which was attempted in 2010 by our friends Mason Earl (USA), Peter Rhodes and George Ullrich (UK), and which had inspired us to go try it in the first place. All credit goes to them for envisioning this free line, unfortunately unlike us they were really unlucky with the weather and had to bail.

We fixed ropes for two days before spending a week on the wall capsule style. The weather was exceptional! We only had two days of bad weather during this ascent! There were days we had to wait for the shade because it was too warm for some of the more technical climbing! I never thought this would be necessary in Patagonia!

The second route was the first free ascent of the East face of Cerro Cota 2000 (500m, 7c+), the big rock face left of Cerro Catedral. At first we thought it was a new line but we found bolts and pitons and now after some research it turns out to be the 1993 Italian route put up by Roberto Canzan, Ferruccio Svaluto Moreolo, Renato Panciera, Alessandro Raccanello and Mauro Valmassoi. On this route, without prefixing, we spent a week on the wall. The weather was really bad this time, we only had two days of ok weather, so many days were spent just hanging in our portaledge. We just needed one day of decent weather to go to the summit, with almost no food left we got our day. Both lines had perfect cracks and dream dihedrals! We also had some really bad weather and extremely strong wind. It was really a lot of fun.

After Paine we headed to El Chalten and during our last three days a very good weather window appeared... so Stephane Hanssens and I headed up the hill for a last time. We went to the North West Face of Fitz Roy and had a great time! 31hours BC to summit, 46hours BC to BC, a quick 1 hour sleep and then a fast run down to El Chalten and rush to Rio Gallegos to catch our plane! Yes, it was hectic!

Since Tehuelche and many other lines were like waterfalls so we climbed new ground to the Grand Hotel and then we finished up El Flaco con domingo. So much fun and some great crack climbing! 1800 meters, 900 of them new, difficulties to 7b+, on- sighting every pitch but one, on which we lowered back down to redpoint. We started climbing at the very bottom of the North-West pillar, climbing two easy steps (5 to 6b+) to reach a steep pillar where the difficulties reach the 7b+ range. From the Grand Hotel we encountered a lot of waterfalls on other lines and, it being dark and us being in a hurry to catch a plane, we joined Flaco Con Domingo and then finished up the Afanassieff route to the summit. An absolutely amazing adventure!