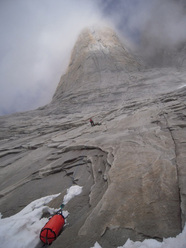 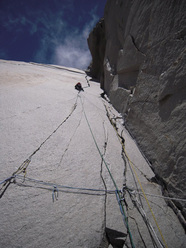 "The South African route offers some of the most amazing free climbing we have ever encountered."
Photo by Xpedition.be 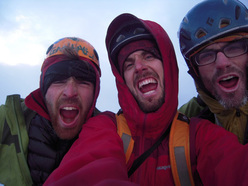 Sean Villanueva, Nicolas Favresse and Ben Ditto on the summit of the Central Tower, Torres del Paine
Photo by Xpedition.be 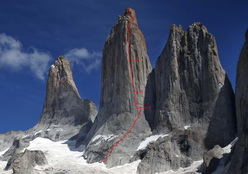 The video of the first free ascent of the South African route on the east face of the Central Tower of Paine, Patagonia, carried out in 2009 by Nicolas Favresse, Sean Villanueva and Ben Ditto.

In February 2009 the Belgian climbers Nicolas Favresse and Sean Villanueva and America’s Ben Ditto spent 13 days on the Central Tower of Paine in Patagonia tackling "some of the most amazing free climbing we have ever encountered" while taking the first free ascent of the big wall established in 1974 by a South African team composed of Paul Fatti, Roger Fuggle, Art McGarr, Mervyn Prior, Mike Scott and Richard Smithers. Here is the video documenting the free ascent a decade ago.