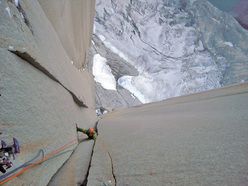 Offwidth climbing up an icy chimney on the South African Route.
Photo by Ben Ditto 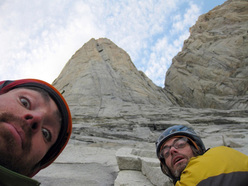 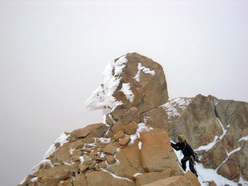 Reaching the summit of the Central Tower, Paine, Patagonia
Photo by Ben Ditto 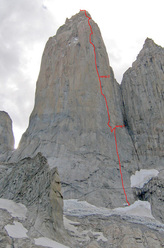 The striking line of ascent of South African route which takes the clearcut dihedral up the East Face Central Tower, Paine, Chile. First climbed in 1973/74, it now goes free at 7b+.
Photo by Ben Ditto

Interview with Nicolas Favresse, Sean Villanueva and Ben Ditto after their first free ascent of the South African Route on the East Face of the Central Tower of Paine, Patagonia.

Two days ago we reported about the successful free ascent of the South African Route up the Central Tower of Paine, Patagonia. At the time we had little information to go by, apart from the fact that Nicolas Favresse, Sean Villanueva and Ben Ditto had encountered some of the most amazing free climbing in their big wall career as they successfully spent 13 days freeing the 1973/74 route. This striking 30 pitch outing is the first line up the East Face to go free and the highly experienced trio believes it now weighs in at around 7b+/5.12c. In between steaks and parties at Puerto Natales, the three managed to send us the following interview.

Congratulations boys! We know the route has hardly been repeated since its first ascent in 1973/74. So why this objective?
When we climbed "Riders on the Storm" three years ago we got very attracted by the line of the "South African route". It's certainly one of the best and most obvious lines on the East Face of the Central Tower. It goes to this huge dihedral that literally cuts trough the middle of the East Face. It's a striking line that remained deep in our minds. We had heard of grades from A3 up to A4 and knifeblade seams so we were really not sure it would go entirely free but we decided that in order to find out we had to go and discover for ourselves. The East Face of the Central Tower is very steep, long and extremely aesthetical. From our experience on "Riders" we knew that the rock of that face offers some fantastic quality granite for incredible free climbing possibilities.

How did you find the route?
The only info we had about the route was a short description by e-mail and a rough line on a picture. We found it long and sustained, following a series of beautiful cracks and dihedral systems. We encountered some of the most amazing free climbing pitches ever. The route is pretty clean: only two bolted anchors. However we did find a lot of old fixed ropes left behind by previous expedition on the East Face (not just on the South African route) and we brought down as much as we could, a few hundred meters of ropes. It's a pity climbers have trashed the wall like this. Most of the ropes we found were hanging on the lower slabs which shares the start with other routes so we are not sure who left them behind.

What's your view of fixed rope therefore and what's your personal climbing code of conduct?
I guess if you use a lot of fix ropes that’s your own strategy choice and there is nothing wrong with that as long as you do everything in your power to bring them back down from the wall. Here though it looked like the climbers didn’t even try to remove them. Considering the small number of ascents on the East Face of the towers and the amount of trashed ropes still hanging on the wall, it seems surprisingly common practice for climbers to leave their ropes behind. And from what we could see, there are still loads of ropes hanging on "Golazo" and "The linea de locura". It was really annoying having to climb around these ropes. The ropes get beaten and trashed by the hard weather conditions but they don’t disappear! We’re more than grateful to be able to enjoy this incredible environment, and find it extremely important to leave as little trace as possible behind. Bringing down those trashed ropes felt like a small extra effort in comparison to the satisfaction it gave us to see the wall cleaner as we were going down.

How did this climb compare to your previous Patagonia experience?
None of the days on the wall were really very good but at the same time the weather was OK enough to climb almost everyday. Some days were pretty cold and snowy. We couldn't get out of our ledges on only on 2 out of 13 days and that's pretty nice for Patagonia! Some of the higher pitches were hard to get in good free climbing condition with ice in the cracks, snow and leaking water. After reaching the summit we had to wait a few extra days to redpoint 3 pitches due to these conditions and even then we still had to jam our hands into icy cracks, which also ads to the difficulty...

What can you say about the 1973 ascent? Seven years before Nico was born....
While climbing the route we realised how impressive that ascent was. We encountered some old skinny hemp ropes! What we found even more impressive is how clean they left the line with so few bolts and fixed pitons. Even by today's standards a first ascent with so little bolts seems rare.

So how did you go about it?
We established two Portaledge camps: one on top of pitch 10, the shattered pillar where we stayed for 7 days and the second at Pitch 17, the Boeing ledge where we stayed for the the rest of the time. We estimate the 2 hardest pitches around 7b+/5.12c. One of them is a very pumpy fingertip dihedral. The other is face climbing boulder problem with an amazing pocket made of crystals. We added one bolt by hand to protect this free variation which climbs away from the aid line. From pitch 8 to almost the top of the wall the climbing is very steep and sustained, mostly in the 5.11 range and never below 5.10+. The gear is mostly good in general with nice cracks which at times are pretty thin. One of the main free cruxes of the route is a mega-sustained steep offwidth which was very runout, protected with one number 6# Camelot. Other difficulties included the Patagonia conditions and the hard work of hauling and living on the wall.

How did you get round the famous King Swing which leads to the massive dihedral systems on the middle section of the climb?
The second ascentionists drilled 2 bat hook holes to get past that section, but this is where we discovered the face climbing variation (5.12c - pitch 15) protected by our only new bolt.

You've often travelled to Patagonia to repeat stuff. Are you not interested in creating some new routes?
Free climbing is what attracts us the most and free climbing an old aid route still brings us a lot of elements of exploration and adventure. Today many of the most striking lines have already been opened as aid route and it's the line and the idea of free climbing it that attracts us most. For us freeing a route of which we don't know if it will go free is very close to the sensation of opening a new route.

Just the three of you...
As long as there is fun, adventure and the spirit of exploration on the wall the number of climbers you're with is irrelevant!

What can't you do without?
A number 6 camelot, musical instruments and big cojones!

Where will these take you next?
We've heard of a virgin like Yosemite valley on Mars ;-)