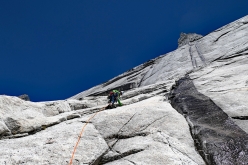 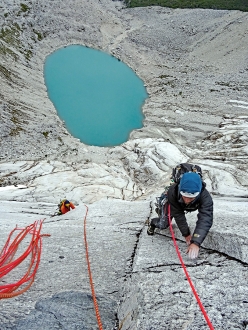 Torres Del Avellano, Patagonia, Chile: Will Sim and Paul Swail seconding the incredible initial pitches of the route up the East Face of the South Avellano Tower.
Photo by Will Sim archive 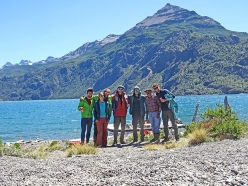 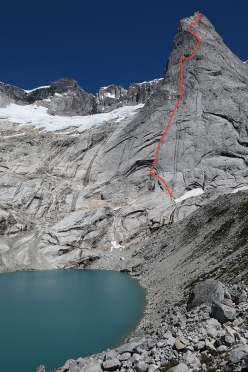 The impressive East Face of the South Avellano Tower, Torres Del Avellano, Patagonia, Chile and the line climbed by John McCune, John Crook, Will Sim and Paul Swail in January 2018
Photo by Will Sim archive

Will Sim and John Crook report about their climbing trip to the Torres Del Avellano in Patagonia, Chile, together with Paul Swail, John McCune and Ruth Bevan. The highlight of the expedition was a 1000 m new route up the East Face of the South Avellano Tower.

A strong team of young climbers comprised of Will Sim, John Crook, Paul Swail, John McCune and Ruth Bevan have enjoyed a highly successful three-week climbing trip to the little-known Torres Del Avellano in Chilean Patagonia, where they established a flurry of new routes. The absolute highlight, without a shadow of doubt, was the first ascent of a new line up the East Face of the South Avellano Tower that had thrwarted two previous attempts carried out by Crook in the past with Will Harris, Dave Brown and Andy Reeve. Will Sim and John Crook now provide the trip report.

Will Sim: It was 3 years ago, on a drizzly, grey, autumn’s day when my friend John Crook came round to where I was living in Llanberis. Without much surprise to anyone who knows John, he came armed not just with psyche to find dry rock amongst the penetrating drizzle, but also with fresh stories from far flung adventures that had come to pass since we’d last seen each other.

That evening sat in the little house on Snowdon street, John showed me hundreds of photos of exploratory climbing in the Andes and Patagonia that had me squirming around restlessly on the sofa in excited jealousy... Jungle bashing to access unclimbed crags, huge dolerite columns like a photoshopped Giant’s causeway, big Andean ice faces, but most of all, a picture of a conical tower-slash-big wall in a remote, almost untouched range of Chilean Patagonia.

John Crook: The Avellano Towers are an incredible place in the Patagonian wilderness of Chile, which I was amazingly lucky to be introduced to 5 years ago. American alpinist Jim Donini was in contact with my climbing partner at the time, Dave Brown, luring us away from distant "weather windows" in El Chalten. Taking him up on his offer of, "something a little different", is one of the best things I’ve ever done.

We made some brilliant first ascents, both with and without Jim that trip. We also made a lightweight attempt on the huge South Avellano Tower. We basically flailed around at the bottom, finding very smooth, low friction granite combined with some quite green cracks. Retreating at lunch-time, we spent the afternoon staring up at the monolith we’d just tried to climb. I’d never seen such a beautiful unclimbed, and I believe, un-attempted piece of rock. I came around to the fact we weren’t going to manage it that trip, but it was some pretty large unfinished business!

Dave and myself returned 10 months later with a pair of strong climbers: Andy Reeve and Will Harris. We made good progress on the obvious central line, before a cold storm blanketed the wall in snow and unfortunately never cleared in time.

Laid to rest for the last 4 years, this trip came around kind of by accident. Will Sim, Paul Swail and John Mcune were already keen to find a rock objective in Patagonia. I showed Will the pictures, without putting too much thought in to it and before I knew it plans were been put in place. My girlfriend, Ruth, agreed to come along and before we knew it all 5 of us were on route.

Will Sim:
In all it took us ten days from arriving in Chile to reach our basecamp beneath the wall. A very rough boat ride across Lago General Carrera saw the team separated with John, Paul and myself on one side of South America’s second largest lake, and John Crook and Ruth on the other, unable to recross due to high winds and waves. Thankfully we were taken in by a nearby Gaucho until the next morning.

After regrouping on the north shore of the lake we walked for 4-5 days with the help of our new gaucho friend Luis and his horses. The last two or three days of the approach were load carrying relays where the ground was too rough for Luis’ horses. Throughout this period the weather was pretty bad and we didn’t get a glimpse of the South Avellano tower until we were nearly at base camp.

John Crook: Getting there is quite a big adventure, involving the crossing of a big rough lake, in a little overloaded boat; horses and Gauchos to take your things 30km up a beautiful valley; then multiple load carries through rivers and rain forest. Base Camp is idyllic with running water and plenty of wood. A well-built lean to, by Will and John, made for extra comfort and cooking lessons from Ruth made for good eating.

After lots of poor weather in December, it gradually improved the closer we got and by the time basecamp was fully established the wall was ready to climb on, although still wet. We made quick progress on my original line, setting ropes to the halfway ledges over the 1st 2 days. Poor weather threatened by the end of the next day, so we made the decision to "go for it". We gained the top of the fixed ropes by daybreak and attacked the headwall in 2 pairs. The rock became more varied, with some loose flakes and areas of exfoliating rock. There was some really high quality climbing and amazing positions, particularly where we had to avoid a big wet corner for a couple of pitches. One particular pitch, Paul Swail quested up really stands out. It looked so unlikely! But after managing to place a peg in a very awkward position, he made steep moves through a roof and in to an outrageously exposed traverse. Almost to my disbelief we found a way up the wall and topped out around that afternoon. Ruth traced our progress from basecamp, with radio contact throughout and even made us pumpkin curry and cheesecake for our return! It began to rain halfway through our descent.


Will Sim: The route had been about 900 -1000 metres long and every pitch had gone free. E5 seems about right, give or take a grade or two…. We were all in disbelief that our main objective had been achieved after only three days effort, we had half expected it to take us up to ten - taking in to account bad weather - and had come equipped with portaledges to give us options. I think the fact that we knocked off the South Tower so fast was partly due to the luck of the weather changing for the better just when we were ready to launch. But also due to the groundwork that John, Will Harris, Dave Brown and Andy Reeve had made in the previous attempts. Thanks boys!

With two weeks of food left in basecamp and high spirits it was a nice feeling to know that anything else we climbed was a bonus, yet there were plenty of plums for the picking. Once our bodies had recovered from the South Tower, myself, John and Paul made the first ascent of a beautiful route on an attractive mountain we got to know as "Cerro Squareface" (actual name unsure?). The climax of this fantastic route was a dream splitter crack that felt about E5 6b and was too good to be true. We strolled around on the windless summit for a few minutes in Patagonian perfection before beginning the descent.

A few days later again John, Paul and myself made another first ascent. This time it was a ridge/spur of classic alpine appearance sporting a worrying looking final tower which we had heard rumours of being attempted previously by an American team. Sure enough, after several hundred metres of serious feeling ridge traversing, the final tower reared above us in a worrying leaning nature. I was dealt with the sharp end and after some scary steep fist jamming through more death-blocks than I like to admit, I rolled on to the summit after completing yet another fantastic, virgin line. We called it the Mestizo ridge.

Our last climbing of the trip was spent trying to repeat our own route up the South Ttower’s East face, but going even more direct in a section we’d spotted a crack with binoculars. Unfortunately it wasn’t to be as the heavens opened on us halfway up the wall. It was the only day of the trip that the forecast was wrong, but we couldn’t complain given the trip we had had.

We reversed the load carrying of the approach and met up with Luis and his horses for the walk out to the lake. Hunger had well and truly set in now that we had exhausted nearly all of our provisions, but we didn’t care, we’d just had 3 weeks of dream climbing in a barely explored Patagonian paradise.

With time to spare before catching our flights back to Europe we relocated to Cerro Colorado. This huge dolerite column protrudes from the Chilean desert just south east of Lago General Carrera. Here we made some more first ascents. But that’s a whole other story...