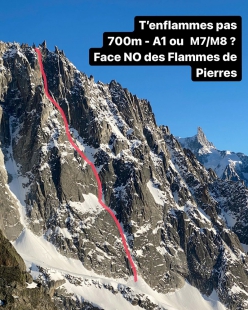 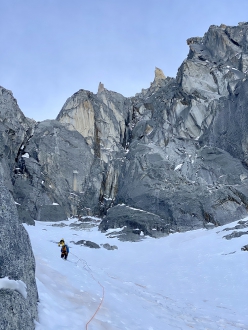 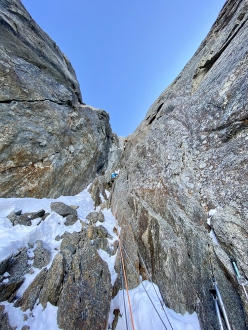 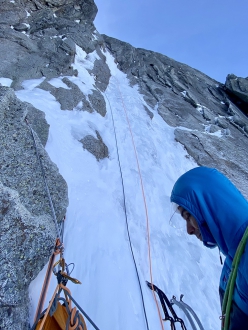 Acting on a tip-off from Julien Herry who had noted a line while snowboarding in the area last year, the three alpinists set off at 4:30am from the top of the Bochard lift, skinning up to the base of the mountain in 1.5 hours. At first light they dealt with the first steep ice located in the long, snow couloir which has probably been climbed or skied before but has no name. This proved far longer than expected and they eventually reached the base of the steep section at noon. From here they tackled the first pitch of mixed climbing (M5) and launched up into the main wall which provided circa 250m of surprisingly steep terrain and tricky rock that required careful attention.

Writing to planetmountain.com, Maynadier explained "We underestimated the difficulties and every pitch was a mix of aid (A1) and dry tooling (up to M7/M8 ). The second free climbed all expect one pitch, which its its big flakes needed some cleaning…" The climbers reached the summit at 19:00 and abseiled down the line of ascent to reach their ski depot at midnight before descending via the classic off-piste Pas de Chèvre that leads from the Grands Montets back down to back to Chamonix, which they reached at about 3:00am

"The whole enterprise took us almost 24 hours, it was cold and hard and fun.” Maynadier stated, concluding “we called our new route T’enflammes pas, after the good lesson this face give us! We cleaned a lot of loose rock, so now it should be possible to climb it free.”