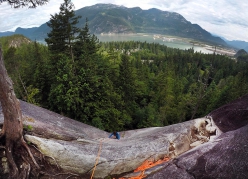 Climbing at Squamish: the first pitch of Skywalker
Photo by Maurizio Oviglia 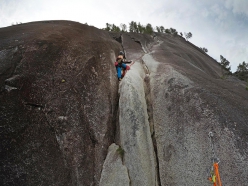 Climbing at Squamish: the route Skywalker
Photo by Maurizio Oviglia 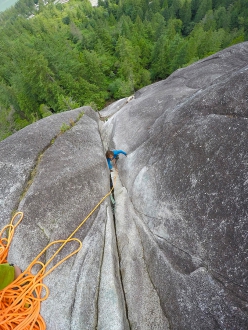 Climbing at Squamish: Cecilia Marchi on the route Skywalker
Photo by Maurizio Oviglia 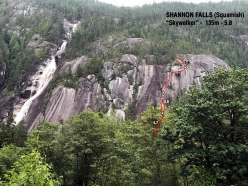 Climbing at Squamish: the route Skywalker
Photo by Maurizio Oviglia

Squamish, Skywalker, and the sublime rock climbing in Canada

Maurizio Oviglia introduces Squamish, one of the world's foremost crack climbing areas, as well as Skywalker, a not too difficult multi-pitch rock climb still fairly unknown outside the borders of Canada.

A few kilometers from Vancouver, on the Canadian coast of the Pacific Ocean, lies Squamish, famous for being one of the most popular crack climbing destinations in North America along with Indian Creek and Yosemite. Unlike these, however, Squamish also offers many easy routes, from single pitch outings up to 9 pitches, which can be great training for those not particularly familiar with placing gear and with American grades, which are much harder than European ones when it comes to crack climbing.

Normally those who visit Squamish head to The Chief. Although not having the grandeur of El Capitan in Yosemite (it is only 200 meters high), this rock face offers many high quality granite climbs. What has made Squamish famous are its clean cracks, which sometimes seem to be cut like a sword. Or its extreme routes, both trad (Cobra Crack freed by Sonnie Trotter) and sport (the famous and beautiful Dreamcatcher, freed by Chris Sharma).

However, as I mentioned, there are many easy and mid-grade climbs that could make Squamish a more popular destination for Europeans who want to combine a visit to Vancouver (recognised as one of the most beautiful cities in the world) or to the Rocky Mountains with a few short climbing trip to Squamish.

For this reason I’ve described a classic, relatively easy route on a lesser known wall (Shannon Falls) but also easy to get to and ideal therefore for those who do not want to tackle huge difficulties in relative safety. The route is called Skywalker and is very popular, so count on encountering various parties on the wall (shade in the morning).

Road access: Squamish is located about 60 km north of Vancouver and can be reached easily by highway. Rent a car at Vancouver airport. The town is located on a fjord wedged between the mountains. Despite the walls facing the sea, unfortunately the highway below disturbs the landscape and the tranquility. On the other hand, access is fast and easy and the northern exposure allows you to climb well even in summer.

Climate: the climate of Squamish is certainly not comparable to that of California. It rains often and humidity is often a problem. Counting on the fact that the walls mainly face northland that the temperature is decidedly lower than in California, it is advisable to plan a visit to Squamish from June to September

Rock: high quality granite covered with dark lichens that disappear on the most repeated routes, which in fact are recognizable even from afar due to their typical white stripes. Even if the climbing is predominantly crack climbing (mainly finger jamming), there are plenty of technical slabs requiring very precise climbing shoes. Unlike Yosemite, there are numerous crystals here and good shoes can make the difference.

Guide: various Squamish guidebooks. We recommend the recent "Squamish Select" by Marc Bourdon. In Squamish there are several climbing shops selling this guidebook.

Gear: in Squamish climbing is not exclusively traditional but there are a good number of sport climbs. It is also easy to find single pitches and ways with bolts placed only in the unworkable sections. For those who want to do trad climbing, I suggest you bring at least two sets of friends, a single rope (or two half for longer routes), small dice.

Accommodation: in Squamish or camping and rooms right in front of Shannon Falls at Kamp Klahanie

Places to visit: Garibaldi Provincial Park is beautiful, just west of Squamish on the road that leads to Whistler. Trekkings from 3 hours to several days in a wild, extraordinarily beautiful environment.

01.10.2017
Cobra Crack at Squamish climbed by Mason Earle
The video of America’s Mason Earle climbing Cobra Crack, one of the hardest crack climbs in the world located at Squamish, Canada, first ascended by Peter Croft in the ’80’s and freed by Sonnie Trotter in 2006.