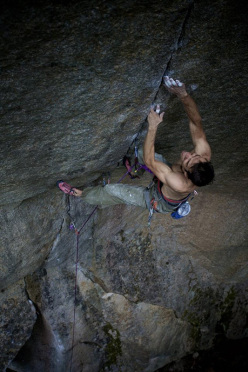 After spending years climbing the world's hardest offwidth cracks and culminating in the first ascent of Century Crack, Tom Randall and Pete Whittaker have narrowed things down considerably and are now concentrating on hard thin finger cracks. This quest has obviously also taken the two Brits to Canada, more precisely to the Cirque of the Uncrackables at Squamish which holds Cobra Crack, the fierce line freed in 2006 by local Sonnie Trotter and hailed as one of the hardest of its sort. Sporadic repeats, by the likes of Nicolas Favresse, Yuji Hirayama and Alex Honnold to name but three, testament how difficult and luring this route is.

Whittaker and Randall gave themselves circa three weeks to get to grips with the former aid route and while working the 30m line soon realised that its painful moves - including the famous mono undercling - lived up to their reputation, as did the fickle Canadian conditions which ranged from endless drizzle to scorching hot resulting in 5:00am attempts in search of cooler conditions. Despite all these difficulties Whittaker succeeded in the repeating the crack last week - placing all gear on lead - as did Randall yesterday, practically the last day of the trip before the rains finally set in.

With such an impressive track record, the obvious question begs: how does Cobra Crack compare to the other hard crack climbs they have amassed over the years? Randall and Whittaker seem in no two minds and concluded their blog report with the following three conclusions: "1. Century Crack is certainly a step above Cobra in terms of difficulty. 2. You can be a good sport climber and could quickly transfer this to Cobra as it's a route that climbs very "sportily" but it would be very unlikely to do the same with Century. We think you'd probably have to dedicate set specific training time for this route. 3. There's a big margin for improvement of crack grades still - surely we are on the cusp of new levels over the coming years?"


Footage taken from the upcoming film WideBoyz 2: Slender Gentlemen. For more news on the Wideboyz head to the Hot Aches Facebook page