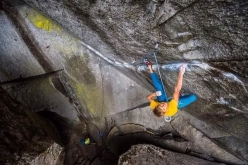 Alexander Megos dashes up Dreamcatcher at Squamish in Canada

Interview with Alexander Megos who recently made the fourth ascent of Dreamcatcher at Squamish in Canada, the famous 9a sport climb freed by Chris Sharma in 2005.

German rock climber Alexander Megos is rounding off his climbing trip to Canada and he has done so in style, repeating one of the most famous sport climbs in the world, namely Dreamcatcher situated on the enormous boulders below The Chief, at Squamish in British Columbia. The route needs little introduction: a "rail" that slashes diagonally across the face from left to right, freed by Chris Sharma in 2005. The route caught everyone’s imagination thanks to the cult climbing video "Dosage 4", and since the footage was placed online on YouTube it’s clocked up more than 3 million views… Including one by Megos who, before flying to Canada, knew only about this route and was certain that he wanted to be the third to repeat this natural masterpiece, after Sean McColl and Ben Harnden. The 23-year-old did so in a single day and this success joins his other Canadian highlights that include the first ascent of the most difficult sport climb in Canada, Fightclub (9b), and a flash ascent of the difficult trad climb The Path at Lake Louise.

Alex, talk to us briefly about Dreamcatcher. A dream?
Yes, definitely a dream come true. Dreamcatcher was the only route I knew when I flew to Canada and I really wanted to do it.

It’s one of Sharma’s most famous sport climbs. What makes it so special?
I think that simply how the route looks makes it absolutely unique! I've never seen such a cool feature on a wall and the fact that it’s climbable makes it even better! The climbing is split into 4 sections, a slab, slopers, finger locks and a campus crux around the corner. People say that the difficulties for those sections are V8, V9, V10 and V11. But for me it felt the other way round. So V11, V10, V9, V8.

How did you attempt the route? Knowing you, flash perhaps? We know you repeated it in a day.
I tried to flash it but in truth that didn't go very well, I fell on the first part, the slab. And it took me at least 5 tries to get past the slab. Even then I messed the slab up 3 times afterwards, so in total around 10 tries were needed 'till I had it in the bag.

How does it compare to other climbs you’ve done?
The grade is fine with 9a. Not crazy hard for the grade but not a giveaway either… If I compare the quality of the rock and the moves it is certainly one of the best routes I've ever done!

Your Canadian bounty is pretty impressive. Any other prizes you’d like to take home with you?
I've just got one more day before I fly home and I'm pretty happy with what I've got, so I'm just gonna have a nice relaxed last day in the bouldering field.

What have you discovered from your first Canada trip? Is it worth the journey for a European sports climber?
I totally think it's worth a trip, no matter where you come from! Both areas I've been to, the Canadian Rockies around Canmore and Banff and then Squamish, blew my mind! Great climbing and great people! Definitely worth a visit!