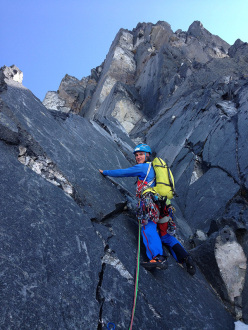 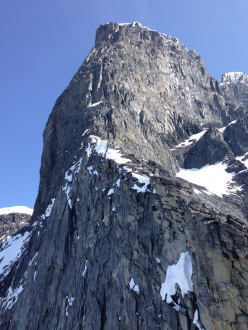 In mid-April 2015 Roger Schäli and Simon Gietl made an alpine style first ascent of the NE ridge of the North tower of Devils Paw, Alaska via their new route Black Roses.

Switzerland’s Roger Schäli and Italy’s Simon Gietl have made a whirlwind trip to Alaska where over a two day period they successfully made the first ascent of the 1000m high NE Ridge of the North tower of Devils Paw.

The two flew in to the peak, located in the Boundary Ranges on the border between Canada and Alaska, on 17 May together with Heli Putz and Ed Shanley. After setting up Base Camp they immediately decided to make a quick reconnaissance to identify a possible line of ascent, climbing circa 150m before returning to BC.

The two flew in to the peak, located on the border between Canada and Alaska, on 17 May together with Heli Putz and Ed Shanley. After setting up Base Camp they immediately decided to make a reccie to identify a possible line of ascent, climbing circa 150m before returning to BC.

On 18 May and in excellent weather Schäli and Gietl set off with a minimum of equipment, taking a tent but no sleeping bags to be as light and fast as possible. They climbed throughout the day, breaching two obvious pillars past difficulties up to 6c, A1,M4, often negotiating dangerously loose rock and some wet rock. Things ran smoothly though and they dug out a platform for their bivouac circa 120m below the summit to enjoy the beautiful sunset before turning in for a very short night. After a mere 4 hours sleep they set off once again at 3:30 am and summited at 6:30 am on the 19th of May.

The descent proved more complicated than expected requiring 5 hours to negotiate the upper section of the East Face and then traverse around to descend the 800m gully on the SW Face and return to base camp.

Only 2 pegs were placed during the 19 hour ascent while 8 pegs, and a rucksack used as a deadman, were left in-situ during the descent. The 1200m long new route has been called Black Roses.

With time on their hands the two travelled to Yosemite where, paradoxically, they encountered significantly worse weather. Nevertheless Gietl was given a great introduction to the valley with a fast ascent of Freerider.

Roger Schäli and Simon Gietl often climb together, with significant ascents to their name such as Arwa Spire in India (2012), on the Tre Cime di Lavaredo in the Dolomites (2012), on Grundtvigskirken in Greenland (2010) and Aguja Poincenot in Patgonia (2010).