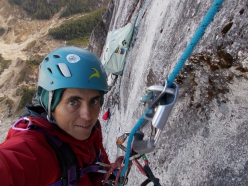 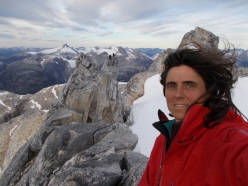 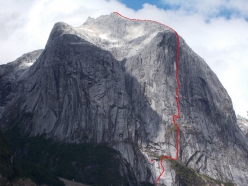 The line of Sincronia Magica on Cerro Chileno Grande in Patagonia, established solo over a period of 33 days from 07/02 to 10/03/2020 by Catalan alpinist Silvia Vidal
Photo by Sílvia Vidal

Catalan alpinistSílvia Vidal has consolidated her reputation for being one of the world’s foremost big wall climbers with her 33-day solo first ascent of Sincronia Magica up the West Face of the remote Cerro Chileno Grande in the Aysén region of Patagonia in Chile. Without any form of communication whatsoever, Vidal remained totally isolated from the rest of the world for a month and a half in order to establish the first route up the face. Circa 1200m high, this breaches difficulties up to A3+/6a+ and was climbed in a determined 33-day push. Vidal’s previous first ascents span the globe from Patagonia to Alaska and Pakistan’s Trango Towers, and the details of her most recent solo trip just before the lockdown in Chile due to the Coronavirus crisis are explained below.


SINCRONIA MÀGICA
Alone and totally isolated and incommunicado; no radio, no phone, no GPS, any kind of communication device for a month and half, in the Chileno valley.

After fixing the first 180 meters, I spent 33 days living on the wall from 7th February until the 10th of March in order to establish a route I called “Sincronia Màgica. The details are as follows: 1.180 meters climbed, A3+/6a+, followed by 30 minutes to reach the westernmost needle, which turned out not to be the main summit.

The wall is huge and vertical. There is circa 330m of vertical terrain, with much vegetation that prevented me from enjoying the climbing there, especially since I didn’t even know how to breach it. I graded it MT (Bush “Matojo” Traction) because in order to climb the vertical cracks that were full of vegetation I used crampons and an ice axe! Protection was very poor and runout.

The rest of the route (the remaining 850 meters) provided slabs and cracks. While the offwidth cracks and chimneys were generally clean, the slabs tended to be covered in moss that proved slippery when wet.

The west face of Cerro Chileno Grande is a complex wall and progression proved difficult, not just because of the technical difficulties of the climb, but also because of the number of rope manoeuvres necessary to move across this varied terrain; roofs, traverses and pendulums... to link cracks and slabs.

I established 3 camps on the wall and climbed capsule-style. The rappels took 4 entire days, and I had to fix the pitches before rappelling them with the haulbags.

Weather was, as always, a determining factor. Considering its location, I actually had quite good weather and although it rained 50% of the days, usually this ratio is higher. I endured two big rain storms accompanied by high winds. Being on the wall in these conditions is dangerous and while rain is common, high winds are not.

In total I dedicated 16 days to transporting my gear to and from the face. I made various approaches through the forest, glacial moraine and across the glacier, each time carrying 25kg of gear. Andrea, Marco and Manu, who work in the area and to whom I am deeply grateful, offered to help carry a load each. I carried all the rest of the equipment on my own, negotiating more than 150km of terrain.

All of the above makes it sound like it was a hell of a place. But it’s not. The place is amazing, beautiful and intense, and my experience is summed up in the name of the route, Sincronia Màgica.

When things flow and somehow continue, despite their complications and difficulties, and eventually transform into what you hoped, then the entire experience becomes worthwhile.

Returning from an expedition where you have been alone and totally isolated requires time to acclimatise to “civilization”, to manage to adapt to the changes. But this time on my return what has changed is the entire planet. The world has changed, and so have we.