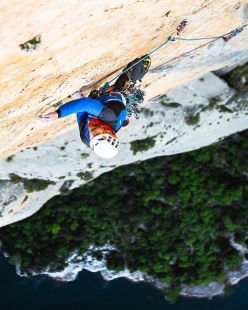 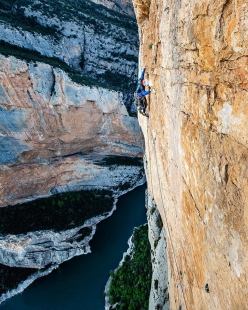 Siebe Vanhee making the first ascent of Sense retorn - No turning back up Pared de Catalunya at Mont Rebei in Spain. The rock climb has been dedicated to Hansjörg Auer
Photo by David Lopez Campe 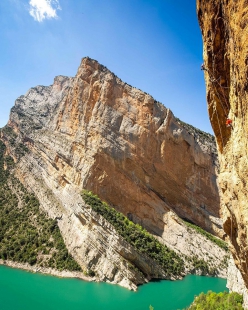 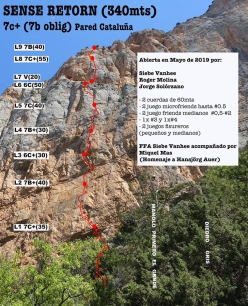 The line of Sense retorn - No turning back up Pared de Catalunya at Mont Rebei in Spain first ascended by Siebe Vanhee, Roger Molina, Jorge Solórzano and dedicated to Hansjörg Auer
Photo by David Lopez Campe

Sense retorn, new climb up Mont-Rebei in Spain in memory of Hansjörg Auer

On Pared de Catalunya at Mont Rebei in Spain Siebe Vanhee, Roger Molina and Jorge Solórzano have made the first ascent of Sense retorn - No turning back, a new rock climb dedicated to Hansjörg Auer.

Over 10 days in April 2019 Belgium’s Siebe Vanhee teamed up with Spain’s Roger Molina and Jorge Solórzano to make the first ascent of a demanding new rock climb up the Pared de Catalunya rock face on the immense Mont-Rebei on the border between Cataluña and Aragon. Navigating past difficulties up to 7c+ and often through sections of loose rock, the trio forged the route ground-up using cams, pitons, skyhooks, stoppers and, when left with no other choice, here and there an obligatory bolt. Vanhee returned on 5 May with Miguel Mas to make the first free ascent of what has now been called Sense retorn - No turning back, in memory of their friend Hansjörg Auer who perished along with David Lama and Jess Roskelley while climbing Howse Peak in Canada in April 2019.

After the ascent Vanhee explained the following: "I can’t think of a way more beautiful to remember Hansjörg… climbing. "If climbing is the thing that makes you happy in life, well do it and live that life" (Hansjörg would state). Sense Retorn is the new route on "Pared de Catalunya" in Mont Rebei, Spain, opened ground-up in 4 days (27/04 – 30/04) together with Spanish maquinas Roger Molina and Jorge Solórzano. I managed to freeclimb the 9 pitches in one day (05/05) with a minimum of bolts and a maximum of removable protection and pitons. For the whole free ascent I was supported by Catalan climber Miquel Mas. Two 7c+ pitches on adventurous terrain (read: loose and sometimes hard to protect) make this climb a big challenge! Also the mid 7th grade pitches provide a pure mental challenge. Some of the pitches are entirely clean (of protection) and climb exposed pieces of rock! Some poor rock quality alternate with magical pieces of solid rock. It’s the line we had hoped for, respecting the pure ethics and culture of Montrebei. Which is ground-up climbing using removable protection like friends, nuts and slings as well as the use of a hammer and pitons while opening the route. Some pitches have bolts for when it was really impossible to climb on removable protection. Free climbing and onsighting on virgin terrain in this style is what I dreamed off!

The importance this route holds for all three climbers can only be underlined. Vanhee stated "Because of the pure character of the climb, the intense moment in my life with the loss of a good friend and climbing partner, we (Roger, Jorge and myself) dedicate this climb to Hansjörg Auer. "Sense Retorn"’ is the Catalan expression for "Without Return", a free translation of Hansjörgs latest movie No Turning Back. His movie is pure, true and sincere, all the things the new route requires to be climbed. Freeclimbing Sense Retorn gives no option to return, the only way is up! This is also the message I want to give to all fellow climbers who lost a friend. Sit still, mourn and climb on with your friend in your heart."

Sense Retorn
starts 40 meters left of Manolo Primera El Grande (365m A3+/6b), established in 1995 by Manuel Lopéz. On its 5th pitch Sense Retorn crosses the 6th pitch of the Manolo route and the new climb shares 15 meters, protected by the original bolts placed by Lopez. No new bolts were added to this section in order to respect Lopez’s route and those who wish to repeat it.

17.07.2016
Chris Sharma, Klemen Bečan climbing the Mont-Rebei project
The third video of Chris Sharma and Klemen Becan on what is destined to become one of the hardest multi-pitch sport climbs in the world (250m, 9a) at Congost de Mont-Rebei in Spain.