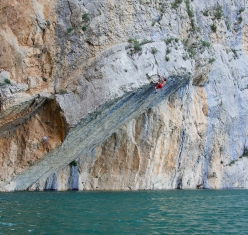 We’re reported on various occasions about Congost de Mont-Rebei in Spain and an incredible multi-pitch climb established by Chris Sharma which currently is still a project but certainly, when it finally goes free, somewhere in the region of 9a. Well this year there was so much water in the river that on his “commute” to the climb the American managed to bag several spectacular deep water solo climbs. Here’s his story.

17.07.2016
Chris Sharma, Klemen Bečan climbing the Mont-Rebei project
The third video of Chris Sharma and Klemen Becan on what is destined to become one of the hardest multi-pitch sport climbs in the world (250m, 9a) at Congost de Mont-Rebei in Spain.