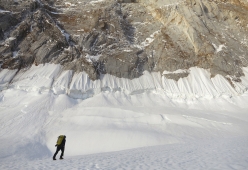 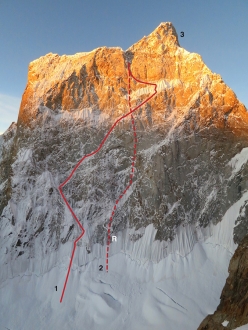 The line of the 2015 attempt, carried out by Scott Adamson and Kyle Dempster, up the North Face of Ogre II, Pakistan. The north face of Ogre II. (1) The Adamson- Dempster attempt. (2) The descent route, with (R) marking the site of the anchor failure.
Photo by archive Kyle Dempster / American Alpine Journal

The search and rescue efforts have been called off for Scott Adamson and Kyle Dempster, the American alpinists last seen on Monday, August 22, 2016 on the North Face of Ogre 2, Pakistan.

Yesterday, Saturday 3 September 2016, the search and rescue efforts were called off for Scott Adamson and Kyle Dempster, two of America's most talented mountaineers attempting to ascend the unclimbed North Face of Ogre II in Pakistan. The two alpinists had embarked up the mountain on Sunday, August 21 and were last seen by their Pakistani cook the following evening, circa half-way up the face. Snow and clouds then covered the mountain and a fundraising appeal was launched by their families that produced an unprecedented show of support from the global climbing community. Bad weather persisted throughout the region though, grounding helicopters and hampering rescue efforts. Two helicopters managed to finally fly over the mountain yesterday, Saturday, 3 September, assisted by German alpinist Thomas Huber. Unfortunately these reconnaissance flights were unsuccessful and no sign of life was detected. Due to the inherent dangers involved in these operations the search and rescue efforts were subsequently called off, as can be read in the statement below.

Adamson 34, and Dempster, 33, are considered among the strongest climbers of their generation, with outstanding climbs across North America and the Greater Ranges. In 2010 Dempster won the prestigious Piolet d’Or for the new route up Xuelian West in China, climbed in 2009 together with Jed Brown and Bruce Normand. Later that year he carried out a series of stunning climbs in the Minya Konka range in western China, including the first ascent of the East Face of Mount Edgar (6618m) which netted him a nomination for the Piolet d’Or. In July 2012 he teamed up Hayden Kennedy and Urban Novak to forge the first ascent the virgin East Face of K7 (Karakorum, Pakistan), while a few weeks later he and Kennedy made the only third ascent of Ogre (Baintha Brakk) 7,285m. For this new route up the South Face Dempster received the prestigious award once again.

Adamson for his part made a series of cutting-edge throughout Alaska and the Himalaya. In 2013 he teamed up with Christopher Wright to make two first ascents of two 6,500m peaks in Nepal, namely Lunag West and Pangbuk North. This was followed by new routes on Mooses Tooth in 2013, and a year later on Mount Huntington in Alaska. One of his greatest loves was climbing in Zion National Park and his oxymoronic discovery of ice climbs in the desert startled the climbing community.

In 2015 Adamson and Dempster attempted the unclimbed North Face of Ogre II (6,980m) for the first time and their return turned out to be a sort of miracle: Adamson broke his leg a few hundred meters below the summit. As if that didn’t suffice, during the already difficult retreat Dempster’s Abalakov V-thread anchor failed while he was abseiing and both fell almost 100m onto the glacier below. Their survival was nothing short of a miracle. The same needed now.

Saturday, September 3, 2016
Salt Lake City, Utah
This update is for Saturday, September 3rd and is provided in order to keep everyone informed of the efforts being made to locate Kyle Dempster and Scott Adamson. NOTE: All dates and times referenced are for Pakistan Standard Time.

Early on Saturday, September 3rd, two Pakistani military helicopters left Skardu in clear weather. They landed at basecamp on the Choktoi Glacier and picked up climber Thomas Huber (Austria) who would assist as an observer/spotter. An exhaustive and close-proximity initial search of the north face of the Ogre 2 (where Kyle and Scott were last seen on August 22), the northeast ridge (their planned descent route), and the glacial basin between the Ogre 2 and Ogre 1, yielded no sign of the pair. After refueling, the two helicopters made a second sweep of all sides of the mountain, from an even higher altitude, and again found no sign of Kyle and Scott. In light of those extensive yet unsuccessful efforts, the search team and knowledgeable observers in Pakistan, the US, and Europe, assessed that there remained a very slim chance that any evidence of their passage would be revealed in subsequent sweeps of the mountain.

Given the time that has elapsed and the nearly continuous stormy weather since they were last seen, and the substantial risks that such high-altitude missions entail, Kyle and Scott’s families have made the extremely difficult decision to end the search efforts.

We owe a huge amount of gratitude to the Pakistan government for scrambling all of their available assets and their commitment to finding Scott and Kyle. Their support, and that of Global Rescue, has been invaluable. Additionally Kyle and Scott’s families are deeply grateful for the assistance provided by the Pakistan Embassy in Switzerland the US Embassy in Pakistan, and numerous other individuals and organizations worldwide. We will acknowledge and thank each of them publicly and privately in the coming days.

That is the update for Saturday, September 3rd. We again ask that everyone please provide privacy to Kyle and Scott’s families. Any questions or media inquires should be directed to Jonathan Thesenga at jonathan.thesenga@bdel.com.