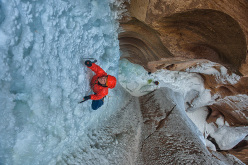 We mentioned in last May when the trailer was released, now the full-length version of Desert Ice is online. As the title suggests, this award-winning film directed by Keith Ladzinski for 3 Strings Productions follows American climbers Scott Adamson and Jesse Huey searching for ice in the depths of the desert. The two strike gold in the splendid Zion National Park and what initially seems like an insane idea is considered by many as one of the most important recent ice climbing discoveries in North America.