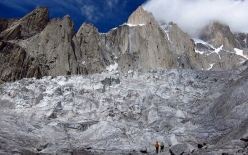 K7, new route up the East Face by Kennedy, Dempster and Novak

Kyle Dempster, Hayden Kennedy and Urban Novak have made the first ascent of a new route up the virgin East Face of K7 (Karakorum, Pakistan).

After last year's attempt which ground to a halt at circa 2/3 height, Americans Kyle Dempster, Hayden Kennedy and Slovenian Urban Novak have now succeeded in forging a new line, alpine style, up the beautiful and difficult east face of K7, 6935m high and hitherto unclimbed.

The trio arrived at Charakusa Base Camp in July, acclimatised on nearby Sulu Peak 5950m, then set off on 16 July to cross the glacier and bivy at the base of the wall. The next day they negotiated snow, mixed and ice terrain to climb past last year's highpoint and spend the night out in the open with no bivy gear. On 18 July the weather started to deteriorate and the difficulties increased, including several M6 pitches and deep snow beneath the summit. According to Hayden Kennedy reporting to Alpinist, this demanding section was overcome thanks to the secret weapon in the form of Novak which Kennedy described as being "the reason we got to the top." The trio descended immediately and after a second bivy on the face returned to Base Camp on 20 July.

There's little point underlining that Dempster, Kennedy and Novak are among the strongest and most famous of the young generation of alpinists. Kyle Dempster received the Piolet d'Or 2010 for his new route up Xuelian West in China together with Jed Brown and Bruce Normand, while Urban Novak led the successful K7 West expedition which received the Piolet d'Or 2012. Extremely talented Hayden Kennedy is intrinsically linked to his beautiful ascents above all in Patagonia as well as the bolt chopping of the Compressor Route on Cerro Torre, carried out with Jason Kruk last January after their impressive go at freeing the entire route.

Apart from the 2011 attempt carried out by Kennedy, Dempster and Novak, the East Face of K7 was tried in vain in 2001 by Conrad Anker, Jimmy Chin and Brady Robinson, while in summer 2007 this face also dashed the hopes of Kelly Cordes and Scott DeCapio. The mountain was first ascended by a Japanese expedition in 1984 and ascended for the second time twenty years later by Steve House who established a new route, solo. It is worth noting that in recent times, above all thanks to House's astounding solo, K7 has become an emblem for a "new" alpine style. With this in mind, this recent ascent - fast, lightweight and alpine style - is certainly worth celebrating.