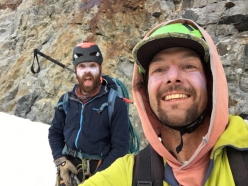 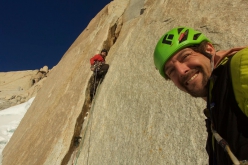 Seán Villanueva O’Driscoll, belayed by Jon Griffin, starting up the Colorado Route on the south face of Fitz Roy in Patagonia
Photo by Jonathan Griffin 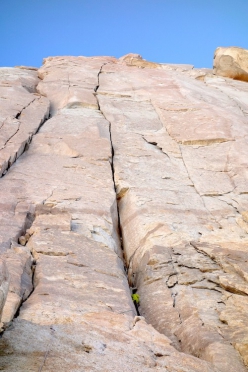 Jonathan Griffin at the base of the monster offwidth now called La Chaltenense (500m, 7a) on the south face of Fitz Roy in Patagonia, first ascended with Seán Villanueva O’Driscoll on 03/03/2021 and described as a 'King Line'
Photo by Seán Villanueva

On the south face of Fitz Roy in Patagonia the alpinists Seán Villanueva O’Driscoll and Jonathan Griffin have made the first ascent of La Chaltenense (500m, 7a), a huge offwidth described by the first ascensionists as a 'king line'.

Not even a month after his milestone Moonwalk solo traverse of the Fitz Roy skyline, Belgium’s Seán Villanueva O’Driscoll has struck again in Patagonia with the first ascent of an enormous off-width on the south face of Cerro Chalten, ie Fitz Roy, with America’s Jonathan Griffin.

As reported by Patagonia expert Rolando Garibotti, on the 3rd of March 2021 the duo started up the beautiful Colorado Route, first ascended in 2016 by Max Barlerin, Quinn Brett and Michael Lukens, but instead of breaking off right after the second pitch they continued up the obvious, "monster off-width" for a further 8 pitches of immaculate and extremely physical climbing.

Huffing and puffing their way up, the duo climbed the route onsight and with trad gear only. No pegs or bolts were placed and, having just two #6 sized Camalots, Villanueva was often forced to run the gear out extremely far. As Garibotti recounts this resulted in "at times leaving no protection between one belay and the next."

Climbing with just one sleeping bag between them and with neither tent nor stove, the duo summited at 3:40am and after a brief rest they descended down the Franco Argentina route. The line has been called La Chaltenense, to honour El Chalten where they have been staying for the last year.

Speaking to planetmountain.com after the ascent, Villanueva explained "I'd been eying up that line for a few years now. Splitter offwidth crack all the way! It's almost all #5 & #6, double fist, hand-fist, chickenwing, armbar... sustained all the way, relentless, with no ledges until the top easier part… Yes, it's a king line!"

15.02.2021
Sean Villanueva and the magical Moonwalk Traverse of Fitz Roy skyline solo in Patagonia
Interview with Sean Villanueva O’Driscoll after the Fitz Roy Traverse in Patagonia, carried out solo from 5 to 10 February and christened the Moonwalk Traverse by the Belgian mountaineer. This is only the second time that the iconic skyline of Patagonia has been climbed in its entirety in a single push, and the first solo.