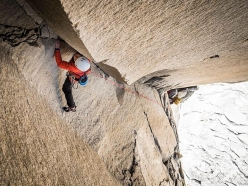 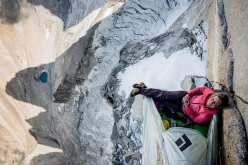 Mayan Smith-Gobat resting in the portaledge 600m above ground on the Central Tower of the Torres del Paine, Patagonia
Photo by Thomas Senf

PORTFOLIO / gallery Portfolio: Riders on the Storm video of Ines Papert and Mayan Smith-Gobat in Patagonia

The video of Riders on the Storm on the Central Tower of the Torres del Paine in Patagonia, repeated at the start of 2016 by Mayan Smith-Gobat, Ines Papert and accompanied by Thomas Senf.

7c+. A2. Difficult? Easy? Depends on your point of view. And depends on where you happen to be. Because if you have to deal with these difficulties in Patagonia, while pinned down by the wind and fighting the biting cold on the famous Riders on the Storm on the Central Tower of the Torres del Paine, these grades become nothing more than tiny details. Fragments of information that serve the purpose of understanding the complexities of ascending a route of this sort.

At the start of 2016 New Zealand’s Mayan Smith-Goat and Germany’s Ines Papert did just this, as they tried not only to repeat the line established in 1991 by Wolfgang Güllich, Kurt Albert, Bernd Arnold, Norbert Bätz and Peter Dittrich, but also to find new solutions that would finally pave the way to the coveted first free ascent.

As reported in March, even if the duo failed close the circle and pull off the free ascent, they did discover some important new variations which, in the future, will turn out to be small details of utmost importance.


02/03/2016 - Patagonia: Riders on the Storm repeated by Mayan Smith-Gobat, Ines Papert and Thomas Senf
Over a 15-day period from 16 January to 20 February Ines Papert, Mayan Smith-Gobat and Thomas Senf repeated Riders on the Storm (7c+, A2, 1300m), the iconic multi-pitch rock climb up the Central Tower of the Torres del Paine in Patagonia. Although some sections were climbed with the use of aid, new variants were discovered thus coming one step closer to the sought-after first free ascent of one of Patagonia's crown jewels.