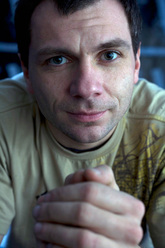 Piotr Morawski, died on Dhaulagiri on 08/04/09.
Photo by Marek Arcimowicz/GORY

Polish mountaineer Piotr Morawski died on Dhaulagiri on 8 April after falling 20m into a crevasse. Piotr Drozdz, a friend and editor of the Polish Gory magazine, has sent us this text in memory of Morawski.

Piotr Morawski was a member of Polish-Slovak team of two – together with his frequent partner in the last years: Peter Hamor. Their main goal was to climb a new route on the West Face of Manaslu. They planned to ascend Dhaulagiri via the normal route for acclimatisation and Piotr was killed during this climb, at circa 5500m (below Camp 1) when they were returning from Camp 2 to the base camp.

Piotr fell 20 meters into a crevasse and this proved fatal, despite the efforts of a Polish Mountain Rescue expediton that was operating on the mountain at the same time.

32 year old Piotr was a leading Polish Himalayan climber of the young generation. He had six 8000m peaks under his belt, including many interesting ascents such as the first winter ascent of Shisha Pangma together with Simone Moro and the traverse of Gasherbrum 1 in pure alpine style with Peter Hamor.

Piotr was also a talented photographer and writer. He wrote numerous features for the Polish magazine GORY and these short, personal texts tell much about his philosophy of life and sensitivity. He concluded his final piece as follows: "I’m already in Kathmandu on another expedition. Maybe this time I will find what I am looking for." Unfortunately it was death which found him in the mountains he loved so much. The entire Polish climbing community is deeply touched by the loss of its friend.

Piotr Morawski leaves behind a wife and two children.