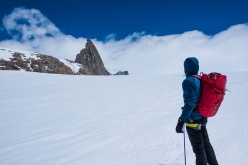 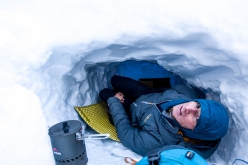 Cerro Mangiafuoco in Patagonia: Luca Schiera in the snowhole
Photo by Paolo Marazzi 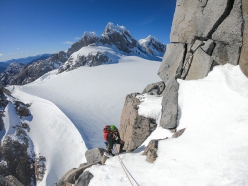 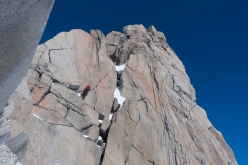 After their new route up the NE Face of Cerro Mariposa in Patagonia in 2017, Paolo Marazzi and Luca Schiera have left their mark in South America once again with the first ascent of a hitherto unclimbed, unnamed mountain in the heart of the immense Campo de Hielo Norte glacier which they have now called Cerro Mangiafuoco (2000m circa).

Having set off from Italy on 24 December, at Puerto Bertrand they waited in vain for the gaucho to help transport gear into the valley and so, in order not to waste the first window of good weather, they crossed the lake by boat and continued autonomously on foot. After three days of walking across the maze of crevasses and battling against strong winds, they established camp on Hielo Norte at an altitude of about 1600 meters, but then returned to the forest to gather more gear that the gaucho had brought in the meantime and to sit out 5 days of bad weather. “We’d already walked almost a hundred kilometers, we were dehydrated and had dealt with the strong winds and sun" explained Luca Schiera "our lips were so swollen that we couldn’t close our mouths and the skin on our faces was so dry, removing the dead layers had become a good pastime for those rainy days ... "

With a good weather forecast the two set off lightly to climb the mountain’s east ridge and after a night in a snowhole on the Nef glacier they started climbing at 6am on 13 January. "We quickly reached the col where the arete started." recounted Schiera "We climbed past rock and snow and dispatched with the lower section of the climb in just a few hours.The central section which we believed to be easy turned out to be somewhat delicate and finding the right route past the towers and along the snow ridges proved challenging. Breaching the stepped terrain with mountaineering boots and our rucksack was tough, and we reached the final section in the early afternoon. Two wide cracks with running water and a third, thinner but drier crack awaited. At the ledge we put on our climbing shoes and after an initial runout we climbed the final pitch, reaching the summit at two. On the endless horizon mountains, snow and ice. The day was perfect, we immediately started the abseils and with bit of luck everything ran smoothly and our ropes never got stuck. We returned to our snowhole at 6pm, gathered our bivy gear and descended down onto the glacier. We reached our camp before midnight and finally enjoyed a peaceful, windless night."

The next morning they began the return back to civilisation and, despite strong winds and rainfall descended - not without difficulty - the river on their inflatable canoes. Back at Puerto Bertrand, they then continued 800km south to El Chalten where they joined up with the other Ragni di Lecco climbers. Matteo Della Bordella and Matteo Pasquetto are currently establishing a new route up the east face of Cerro Torre, while in recent weeks Dimitri Anghileri and Riky Felderer climbed Aguja Guillaumet (Giordani + Fonrouge), Aguja Mermoz (Argentine route) and Aguja Poincenot (Whillans-Cochrane with Daniel Ladurner and Aaron Durogati).