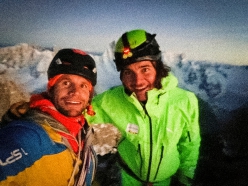 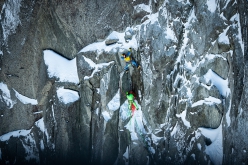 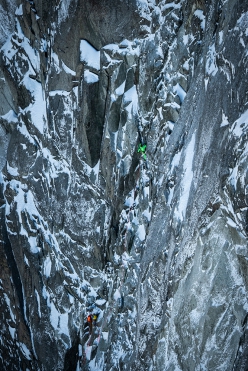 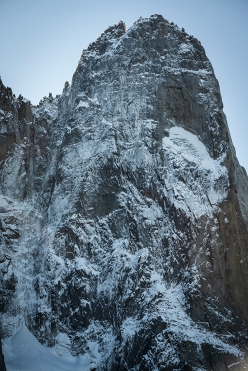 With their ascent of Petit Dru in the Mont Blanc massif, Simon Gietl and Roger Schäli have now climbed five of the six great north faces of the Alps. After Cima Grande di Lavaredo, Pizzo Badile, Eiger, Matterhorn and Petit Dru, now the only peak missing off their list is the Grandes Jorasses.

Another 140 km by bike. Another 2210 meters pedaling uphill and descending 2350m. And another north face, the Petite Aiguille du Dru, more commonly referred to as the Petit Dru. This is the "booty" of Simon Gietl and Roger Schäli who are now on the home straight of their North6 project, having already climbed Cima Grande di Lavaredo, Pizzo Badile, the Eiger and the Matterhorn. And, a small detail of large importance, after having travelled from one mountain to the next by bike.

After the Matterhorn the pair headed from Zermatt to Chamonix where they waited for the storm to end that brought with it a nice layer of pristine snow. They then ascended to the base of the Dru where they spent the night, before waking up at 3am and climbing the North Couloir. Tackling wintery conditions they required 17 hours to reach the summit at around 20:00, after which they abseiled through the dark down the south face, descending 800m to reach Refuge de la Charpoua (2,841 m) at 01:30 in the morning.

"It took us a long time. Logically" explained Roger Schäli. "The first few pitches were really tough. Fortunately Simon was very motivated clibing through the thick of night, despite the constant spindrift at the start. We had to stop a couple of times and wait a few minutes for the snow to whiz away." On the steeper sections the team managed to make faster progress, but on the whole conditions were very wintry. "The conditions on the Dru were difficult. But the ice was good. And also the abseils down the south face went well." All eyes are now on the last mountain needed to complete their project, the Grandes Jorasses.

22.09.2021
Simon Gietl, Roger Schäli climb Matterhorn Schmid route in North6 project
After Cima Grande di Lavaredo, Pizzo Badile and the Eiger, alpinists Simon Gietl and Roger Schäli have now climbed the Matterhorn via the Schmid route. To complete their North6 project, only two famous north faces of the Alps are still missing off the list: Grandes Jorasses and Petit Dru.