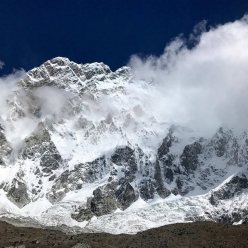 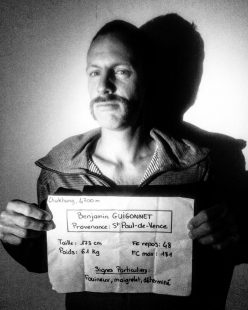 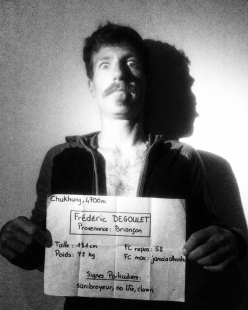 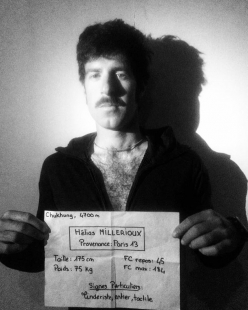 French alpinists Hélias Millerioux, Frédéric Degoulet and Niçois Benjamin Guigonnet have made an alpine style ascent of a new route up the South Face of Nuptse, Nepal Himalaya

After acclimatising on Cholatse, at the start of October the climbers stashed gear below the base of the South Face and then set off on 13 of October, climbing to 5950m where they established Camp 1. They continued at midnight and climbed until 14:00 to establish Camp 2 at 6581m. Strong winds during the night stopped them from sleeping well, and so they set off late the next day, climbing to 6800m and their Camp 3, while Camp 4 was established at 7013m. Until this point they were following the line attempted previously - this was Helios Millerioux’s third attempt on the face - and at 9:00am they set off into the unknown, ascending another 450 meters not without difficulties to reach the summit ridge and establish Camp 5 at 7443m where they were poised for the summit bid. The final section was climbed slowly - circa 50 meters height gain / hour - but then they reached the summit, in exceptional weather, without any wind whatsoever and with an extraordinary view across onto Everest. Excited and with another three hours of daylight they descended to Camp 5, while during the descent to Camp 2 the next day a block of falling ice struck Millerioux’s right shoulder, fortunately not injuring him seriously. Yesterday they descended safely and returned to the base of the mountain.

Nuptse was first climbed in 1961 by a British-Nepalese expedition led by Joe Walmsley that chose the circa 2500m high and almost 5km wide South Face as the ambitious line of least resistance to the 7,864m main summit. After establishing 8 camps, on 16 May Dennis Davis and Tashi Sherpa stood on the main summit, and they were followed the next day by Chris Bonington, Les Brown, Jim Swallow and Pemba Sherpa; the expedition is widely considered one of the first technical big walls to have been climbed in the Himalaya. No other route up the South Face climbs to the Main Summit. In 2003 the Russians Valeriy Babanov and Yuri Koshelenko succeeded with their ‘Moonlight Sonata’ in climbing the SE Pillar and reaching the virgin summit of Nuptse East (7804m), while in 2008 France’s Stephane Benoist and Patrice Glairon-Rappaz established a bold route in alpine style that joins the British route on the upper section of the face.

Video of the 2016 French attempt

29.05.2014
Siula Chico: Looking for the Void, new French route in Peru
From 16 to 20 May 2014 the French alpinists Frédéric Degoulet, Benjamin Guigonnet, Hélias Millerioux and Robin Revest made the first ascent of Looking for the Void, a difficult new ice and mixed route up the West face of Siula Chico in the Cordillera Huayhuash in Peru.