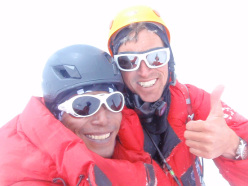 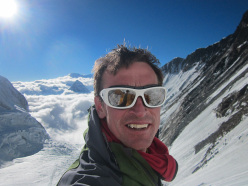 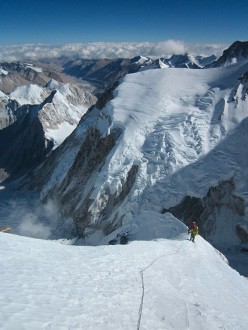 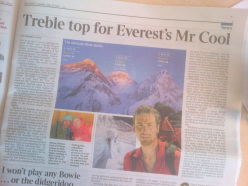 The article in The Times on 20/05/2013 dedicated to Kenton Cool and Dorje Gylgen Sherpa and their historic triple in the Himalaya: between 18 -20 May they climbed Nuptse, Everest and Lhotse.
Photo by Kenton Cool archive

Interview with Englishman Kenton Cool after his ascent of Nuptse, Everest and Lhotse carried out between 18 and 20 May. The detailed account of this Himalayan triple and his point of view, as a mountain guide, about commerical expeditions and the crowds on Everest.

Kenton, Everest 11 times… the question arises spontaneously, are you chasing some sort of record or is it something else you're searching for on this mountain?
I’m definitely not chasing any records. It's a horrid thing to say about such a beautiful mountain, but Everest for me is work. I’m a Mountain Guide and that's what keeps taking me back to Everest.

For our most technical readers; can you provide a brief run of the enchainment?
I left BC on May 15th at about 5am and climbed to Camp 2 on Everest at 6300m. I spent a couple of hours there before I swung round to Camp 3 on Nuptse at approx 6800m. On May 16th I left Camp 3 at about 2 am and climbed Nuptse in approximately 10 hours, before descending back to Camp 2, arriving at approximately 17.45. I then left Camp 2 on May 17th at 08.00 and climbed to Camp 3 on Everest, and left this on May 18th to reach the South Col on Everest. I left the South Col at approximately 20.00 and climbed towards the summit of Everest, which I reached on May 19th at 01.45. I returned to the South Col at 04.00, slept for a couple of hours, then left at 10.00 for Camp 4 on Lhotse, arriving at approximately 12.00. The following morning, on May 20th, I left Camp 4 at 09.15 and reached the summit of Lhotse at approximately 13.00. I descended to Camp 2, and reached Base Camp the following day, on 21st of May. I used 2 bottles of supplementary oxygen on Everest and 1 bottle on Lhotse. Due to the fixed ropes on the mountains the equipment was fairly minimal: standard down suit, boots etc.

Pulling it off during the 60th anniversary, timing couldn't have been better!
The stars all came together for me it seems.

Do tell us more
I was very lucky with getting all three mountains fixed and having good weather. The trilogy is something I'd thought of a few years ago but never had the opportunity to try. This year, with my client not arriving due to personal and business reasons and the fact that Russel Brice wanted to fix Nuptse, it simply seemed like the prefect time to try and climb all three.

Out of interest, we failed to find any information about you on either Nuptse or Lhotse previously. Had you climbed these before?
No, it was the first time for me. And very enjoyable, too!

Where did you and Dorje Gylgen Sherpa meet the first climbers on your way down off Everest?
Just above the Hillary step, Jon and another friend of mine. After that I met another two friends of mine, Bill Crouse and Himanti, below the South summit.

What about that summit moment on Lhotse, the last of the trio? And that long, difficult descent?
Lhotse was a little disappointing in as much that I’ve wanted to climb it for a few years and I’ve always wanted to see the view. When I got to the top with Dorje, Mike Roberts and his Sherpa the cloud was sucked right in and we couldn’t see anything. This was pretty upsetting and not part of the plan, but that's mountaineering for you.
The descent was quick but arduous, Lhotse was super dry this year so there was plenty of loose rock around that we had to be careful of, but it's a straight up and down route so we were quickly back at Camp 4... from there though its a long way back to Camp 2 and then BC.

So tell us something about Dorje Gylgen Sherpa. Six times on Everest together. An ideal partner, surely!
He is fabulous. I first met him in 2007 and have worked with him every year since. He is super strong but, better than that, he has a great grasp about what makes me tick. I really enjoy spending time in his company, just chatting about all sorts of random things but often it comes back to family. Dorje has 2 daughters and a son, his son is the same age as my daughter so it's always fun comparing notes. I really wouldn’t have wanted to climb with anyone else on this little mission, my only regret was that Dorje was busy carrying a load to the South Col the day I climbed Nuptse so he wasn’t there with me. If I could alter one thing it would be that... he really deserved to be there!

After all the climbs you've done in the Greater Ranges, how do you rate these climbs personally?
I would have loved to have climbed Nuptse without the ropes but the fact it was fixed made the whole thing possible, so I shouldn’t really say that. I think Nuptse would make a great alpine style objective, I have often eyed it as I walked past on my way to Everest and watching Gerlinde and David climb it last year really made me want to climb the peak. I feel very lucky to have climbed all 3 in a season but I fully understand the help the fixed rope made; I hope one day someone will take the mantle from me and climb the hills without the rope or without using O2. I think I have simply shown the way and someone will quickly surpass my efforts.

You know Everest and the commercial expeditions better than most. What are your thoughts about the crowds on Everest?
The numbers were down on Everest this year, which is a good thing: there were less than 100 Western climbers on the North side and around 240 on the South side. That said, the total number of summits was similar to last year. I think the crowds of 2012 were something of an unfortunate occurrence, there were only a handful of good summit days so this pushed everyone into a funnel. BUT the industry cannot simply hope that this doesn’t happen again. Everest is still a honey pot mountain and people flock to her slopes each year, so the commercial teams will have to regulate the mountain somehow. This year, for the first time ever, we saw a 2nd fixed line put in at the Hillary step which is the big bottle neck. Luckly it didn’t have to be used, but it's a step forward. To have images like the ones we saw last year is not an option if the industry wants to continue to thrive.

An almost obligatory question concerning the unfortunate Sherpa affair with Moro, Steck and Griffith. You yourself have guided people to the summit of Everest, making use therefore of the Sherpa's expertise. Did this issue surprise you and, in your opinion, what can and should be done to avoid confrontations in the future?
I was surprised by this, especially by the fierce reaction by the Sherpas which is quite out of character. It would seem that the reaction outweighed the provocation, but then I suspect we will never get the whole story. I don’t think we will see a situation quite like that again, at least I hope not, having chatted to Ueli and the guys it sounded very nasty. I think it's a respect thing, in the mountains we need to respect all those around us, we all come from different backgrounds and egos can easily be dented. Perhaps this is what happened. What I do know is that fighting doesn’t have a place in the mountains.

How do you imagine Everest in the future?
I’d like to think Everest remains a focal point for climbers. I’m not sure if the bubble will remain as big in the future as it has the last few years, but it will always have a pull for people in the same way it did in the 20’s for the early expeditions. Everest is the highest and because of that it will always have a special place in the hearts of climbers.