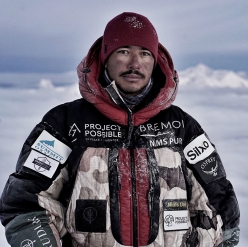 Earlier today the Nepalese mountaineer Nirmal Purja reached the summit of Shishapagma and, in doing so, completed his ‘Project Possible’ which aimed at climbing all fourteen eight-thousanders in less than seven months. Purja required just six months and six days; the previous record to complete Himalayan crown was over 7 years.

Former British army Gurkha Nirmal Purja from Nepal is making headline news worldwide today for having climbed Shishapagma, the last of the 14 mountains above 8000 meters he still needed to ascend in order to complete the famous Himalayan crown in a record-breaking 189 days. Or six months and six days, which shatters the previous "record" set by South Korean mountaineer Kim Chang-ho who required seven years, 11 months and 14 days to complete the coveted high altitude collection.

The first to climb all the 14 highest mountains in the world, needless to say, was Reinhold Messner in 1986, followed by Jerzy Kukuczka in 1987. And it’s also needless to say that these two authentic precursors and all-time greats led the way for everyone else by adopting a style - without supplementary oxygen, often forging new routes and, in the case of Kukuczka, even in winter - that is far removed from that of the extremely talented Nepalese mountaineer.

Indeed, in order to succeed in this massive undertaking Purja relied on supplementary oxygen and an exceptional team of Sherpa that enabled him to climb several mountains in rapid succession. Having previously climbed Everest, Lhotse and Makalu in a record time of just 5 days in 2017, the 36-year-old began his Project Possible challenge on 23 April 2019 by ascending Annapurna.

At that time of his announcement many doubted his project could come to fruition, in part due to the objective difficulties of these Himalayan giants, in part due to the prohibitive costs of climbing at altitude. Not to be outdone, Purja overcame all obstacles thanks to new sponsors, a crowdfunding initiative launched on the internet, by guiding clients up Annapurna, Nanga Parbat and Manaslu and even mortgaging his own home.

After Annapurna, Purja climbed Dhaulagiri and Kanchenjunga, then ticked the trio Everest, Lhotse and Makalu once again, this time in a mere 48 hours and 30 minutes. It’s worth noting that Lhotse was climbed on the same day as Everest, just ten hours after taking that famous photo of the interminable queue close to the summit of the highest mountain in the world.

Makalu was climbed in May, Nanga Parbat, Gasherbrum I and Gasherbrum II in July, then came the biggest prize of all, K2. This season the second highest mountain in the world had thwarted all attempts and although virtually all commercial expeditions had declared the mountain impossible, Purja and his team waltzed into basecamp and blasted their way past the Bottleneck, opening the route to the top for themselves and for the few remaining mountaineers, such as Adrian Ballinger and Carla Perez. Nearby Broad Peak was climbed two days later, while Cho Oyu and Manaslu were climbed in September.

The only one missing on the list now was Shishapangma, the lowest of all eightthousanders, but the project suddenly came up against a completely unexpected and apparently insurmountable obstacle: the Chinese bureaucracy that had closed the mountain to everyone this autumn. Purja and many others tried their best to convince the Chinese authorities, even the Nepalese government approached its Chinese counterpart, then much to everyone’s surprise a special permit was granted. Purja didn't wait to be asked twice and despite the difficult conditions, at 8.58 am this morning he reached the summit with Mingma David Sherpa, Galjen Sherpa and Gesman Tamang.

Nirmal Purja thereby enters the record books for his 14 x 8000ers (with supplemental oxygen) climbed in just over six months. Six months that seemed like an unstoppable tornado and during which - despite the seemingly impossible project - he also assisted in three rescue operations at extremely high altitudes. It's important that he will be remembered for this, too.