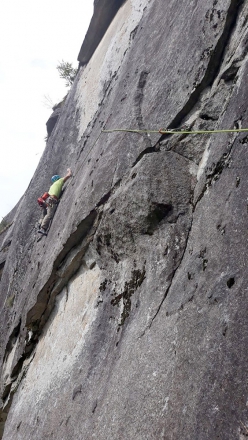 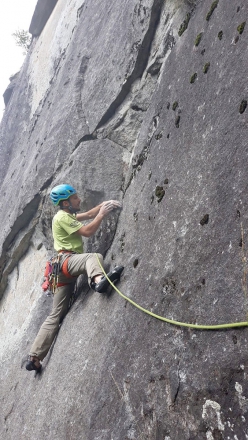 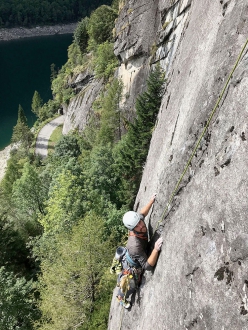 Scoglio di Boazzo is a compact granite shield overlooking Lake Boazzo high up in Italy's Daone valley. The approach requires just five minutes and over the years many interesting routes have been established on this rough cliff. Unfortunately though, 80% of the lines have fallen into disuse, for various reasons: poor in-situ pro, little information, questionable grades and routes overgrown with vegetation

Most climbers who venture up here repeat only three or four routes, among which the most popular is perhaps Spaghetti allo Scoglio, first ascended by Ivan Bonaglia and Danilo Maghella. Matteo Rivadossi and Silvio Frieschi from Brescia habitually added routes here, as did local Ermanno Salvaterra when not in Patagonia and suffering from withdrawal symptoms of those far-away lands.

Salvaterra established some climbs that have only one or two repeats, such as the fearsome Mala onda and Buena onda, graded A4 and without a series of drilled hooks that an American climber would grade A1+.

Nido di rondine described here, which translates as Swallow's Nest, is a forgotten gem that I am pleased to have rediscovered a few years ago. Ermanno made the first ascent in 1985 with obligatory 6c+/7a climbing. No mean feat back then.

The short stretch of original aid can now be avoided with a free variation that Nicola Castagna and I added in 2018, resulting in a high quality free climb on excellent rock.

Furthermore, in 2019 Yerokhin Vyacheslav and I replaced the bolts, maintaining the original distance as set out by the first ascensionists. Nido di rondine now provides a fun half day of spicy, quality climbing.

15.05.2020
New multi-pitch rock climb in Limarò Gorge, Sarca Valley, Italy
In April 2019 Francesco Salvaterra and Vittorio Giovannella made the first ascent of Calypso (150m 6b, 6a ob.), a new multi-pitch sport climb in the Gola del Limarò canyon in the Sarca Valley close to Arco, Italy.