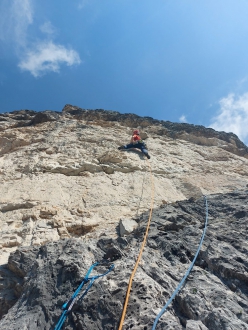 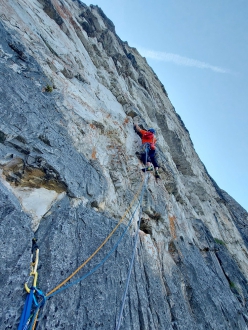 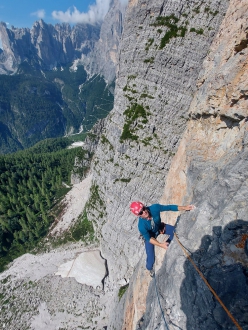 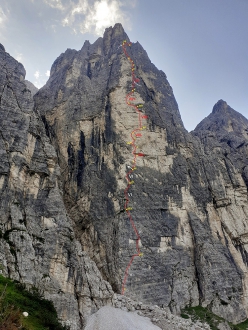 In August the Slovenian alpinists Andrej Grmovšek, Luka Krajnc and Luka Lindič teamed up with local Italian climber Alessandro Baù to add a new variation to the west face of Cima Gianni Costantini in the Moiazza group of the Dolomites.

It's been described laconically as "a small addition to the walls of Moiazza", created by Andrej Grmovšek, Luka Krajnc and Luka Lindič from Slovenia and Alessandro Baù from Italy, and while the route is indeed a variation, it's not a particularly little outing up the west face of Cima Gianni Costantini.

After the first four pitches of Non ti Fidar di Me se il Cuor di Manca, instead of trending leftwards the mountaineers continued straight up into the yellow Dolomite. "We then climbed 5 new pitches of sustained terrain which was easier to climb that is looked from the ground." Lindič told planetmountain. On the upper section they joined the Massarotto-Galiazzo route and followed this for a further three pitches to the exit ledge.

"We were able to climb everything without the use of bolts so the pitches offer some exciting climbing. The entire route is 600m high and on three pitches the climbing reached difficulties up to grade VIII-. We equipped the belays with pitons and there are few more along some of the pitches, but mostly one needs to be creative with cams."

For those wishing to repat the route, take two sets of Cams to size #2 and one size #3, a set of nuts and a 60m double rope. A hammer and few pitons may be found useful.