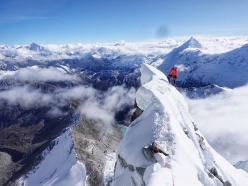 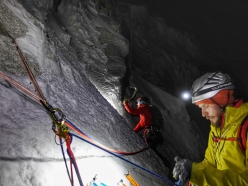 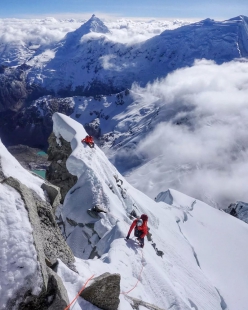 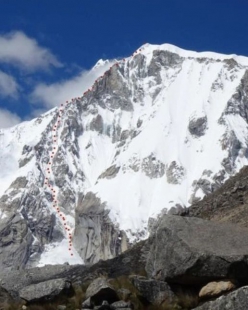 On 10 June 2022 a small, strong team of Italian mountaineers comprised of Thomas Gianola, Alessio Miori and Giovanni Zaccaria successfully established a new route up the north face of Ranrapalca in the Cordillera Blanca in the Peruvian Andes. Standing 6162m tall, this peak was first climbed by Germans Walter Brecht, Siegfried Rohrer, Karl Schmid and Hans Schweizer in June 1939 via the NE Ridge.

The Italians travelled to Peru in mid-May together with Nicolò Geremiaand acclimatised first by sport climbing at above 4000m at Hatun Machay, then by ascending three 5000ers, Huamashraju 5434m, Yanapaccha 5460m and the "super classic" Ishinca 5530m. After completing the acclimatization phase the team headed to Ranrapalca to climb a line to the right of the NE Ridge, up the central section of the north face and immediately to the left of Learning of our Weaknesses (Carlos Pinesa, Carlos Solé, 2013). Climbing alpine style, Gianola, Miori and Zaccaria tackled the face at night and then battled fatigue as they followed the ridge to the summit, while Geremia was forced to stya at base camp due to intestinal problems.

Zaccaria says on his Instagram page "The descent via the normal route had to tracks and wasn't equipped, since our ascent was the first this season... what a journey! It took an 18-hour round trip from Vivaque Longoni, but in truth it took us far longer. Starting with when Alessio Miori spotted the line in a photo on the internet, past the jolting taxi on unlikely dirt roads, the hours spent approaching the mountain, first with mules and then with everything on our backs. The view of face, which we studied carefully through binoculars to study conditions and dangers... In short, what I'm trying to say is that climbing a mountain is far more than simply climbing a mountain."

The new route is called Mucha Banana, is 600m high and provides varied and technical climbing with difficulties up to 80°, AI3+, M5. More information about the climb, and also on the other salient expedition moments, will follow after the group's return to Italy.