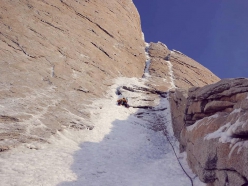 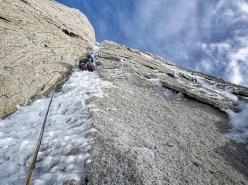 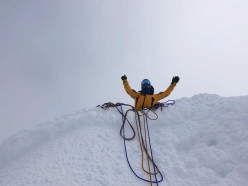 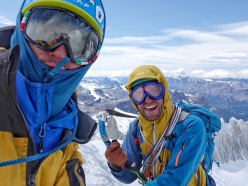 On the east face of Cerro Piergiorgio in Patagonia Italian mountain guides Alessandro Baù and Giovanni Zaccaria have made the first ascent of Scrumble de manzana.

The news just in from El Chalten in Patagonia is that the Italian mountain guides Alessandro Baù and Giovanni Zaccaria have established a new line on Cerro Piergiorgio, the huge granite monolith covered with ice, snow and time located "behind Fitz Roy and behind Cerro Torre, far removed from the main action."

The two spent almost 7 hours approaching the mountain after having spent the night in their tent sheltered in the woods between Piedra del Fraile and Piedra Negra. Acting on a tip-off from Rolando Garibotti, after this “warm-up" they then followed a thin line of ice circa 200m high, described as being "not too long but very beautiful." This enabled them, after one abseil, to join Esperando La Cumbre, established in 1996 by Maurizio Giordani and Gian Luca Maspes.

The two then continued onto the summit ice mushroom: " Zaccaria said, adding "In this Patagonian season marked by an absence of good weather windows, this ascent is worth much more than the icing on the cake: it’s a day we won’t forget."

In the past both Bau and Zaccaria have topped out on several mountains in Patagonia. The new climb Scrumble de Manzana on Piergiorgio, named after the delicious apple pie they ate at Rifugio Fraile, provided them "Unique emotions, with the towers of the Fitz Roy and the Cerro Torre meringue in the background."

31.03.2019
Jim Reynolds races up Fitz Roy in Patagonia solo
American alpinist Jim Reynolds has made an extremely fast solitary ascent of Fitz Roy, climbing up and down climbing the long Afanassieff route.