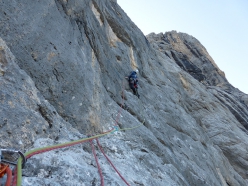 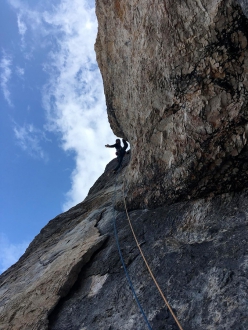 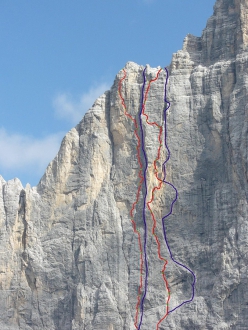 Last summer Belluno alpinists Luca Vallata and Davide Cassol made the first ascent Capitani di Ventura, a big new multi-pitch climb that reaches the summit of Punta Civetta in the Dolomites. Established after four attempts, it breaches difficulties up to VIII-/A1 and tackles a line between Chimera Verticale and the Aste - Susatti route on the left, and the Günther Messner climb on the right, with which it shares one belay. Vallata reports.

In summer my climbing partner Davide Cassol and I managed to complete a new route up the NW Face of Civetta; the climb ascends the virgin buttress between the classic Dolomites outing via Aste (Armando Aste, Fausto Susatti 1954) and Via Günther Messner (Sepp Mayerl, Leo Breitenberger 1970). We needed four seperate one-day pushes to complete the line; the fact that we didn’t bivy wasn’t because we didn’t want to, but because of the short spells of stable weather at the weekends, and generally due to the poor weather.

Everything ran smoothly during the first ascent, except for a somewhat bothersome storm three pitches below the summit, while the line we actually ascended was pretty much what we had envisaged before starting. The rock quality at the grey sections is very good, apart from a large threatening flake which inevitably has to be used, gently, at the start of the first difficult pitch.

The crux of the entire route is getting through the central yellow band of rock, past four fairly friable pitches. We were forced to resort to aid on two of these, but I believe that in time they will be cleaned and climbed free. The most demanding section here is breaching the final roof: grade VII difficulties, past some loose blocks (which we jokingly called "talking bricks").

Both Davide and I spent our teenage years fantasising about the climbs on Civetta in general and its mysterious, startling NW Face of Civetta in particular. We then started climbing this mountain. First its towers and then, slowly but surely , the central face. Just like for everyone else who’s climbed the Northwest face, each adventure inevitably ended in the same manner: with a gigantic pile of dishes that needed to be washed in Ventura’s kitchen (ed. Venturino De Bona, hut warden of Rifugio Torrani located just below Civetta and first ascentionist of two legendary NW Face outings, Viva Mexico Cabrones and Nuvole Barocche).

Bearing this local tradition in mind, and bearing in mind that both Davide and I have stepped in for Venturino when necessary and managed the hut, we have decided to call the route Capitani di Ventura. Ventura's scullions seemed too unflattering.

We would like to thank all the staff at Rifugio Tissi, in particular Valter, Paola, Sara, Nadia, Alice and Eliana, as well as, of course, Venturino "Ventura" de Bona for their warm welcome and kindness.