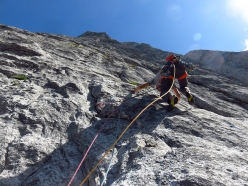 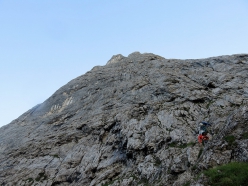 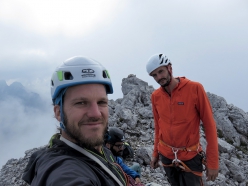 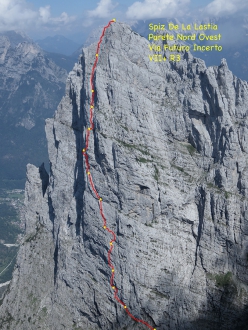 On Spiz de le Lastia in the Agner group, Dolomites, Lorenzo Corso, Diego Toigo, Luca Vallata have made the first ascent of Futuro Incerto. Diego Toigo reports about the climb, established with one bivouac from 18 to 19 August 2019.

While making the first ascent of Mente Demente I was struck by the central shield of Spiz della Lastia and above all by the obvious "Shark’s Tooth" suspended right in the middle of the wall. I carefully studied some photos and identified a line that might breach the steep slabs and roofs, all that was left to do was give it a try. In mid-August Lorenzo Corso and I finally had two days off, the weather was great and right at the last minute Luca Vallata managed to return from his efforts on Civetta, our team was complete.

Good old Marco, the hut warden at Rifugio Scarpa, gave us an early morning lift up to his refuge and from there we continued on to the base of the face, past the abseils we’d equipped last year for Mente Demente. We stated up the central slabs, avoiding the overhangs past a series of very beautiful pitches, not too extreme but nevertheless with constant difficulties, up the beautiful Spiz rock. The crux pitch led us to the belay at the top of the Shark’s Tooth, congratulations to Lorenzo for managing to dispatch the overhanging crack. Another two pitches led us to a comfortable ledge, ideal for the bivouac with an exceptional view onto the San Lucano Valley.

The night passed by without too many problems, except for me who’d had the brilliant idea to not take a sleeping bag. The next morning we followed the most logical exit line already taken by the Mass climb for two pitches and then we untied and scrambled up for another 150 meters to the summit.

We enjoyed the top for a few minutes, each immersed in his own thoughts, directly opposite the south face of Spiz d'Agner with its famous route Felicità a Momenti, Fleeting moments of happiness, established by Gigi dal Pozzo and Maurizio Fontana. We thought it would be nice to have this mirrored by an Uncertain Future, hence Futuro Incerto, our small tribute to this great partnership that created some truly magical masterpieces.

We quickly descended towards a glass of beer and the superb welcome at the Scarpa hut, where Marco told us that while we'd been climbing Spiz, some climbers from Vicenza had breached the famous top shield of Mt. Agner. Twice as happy as before we celebrated this New Dawn in the Agner group.

04.09.2018
Mente Demente new rock climb up Spiz of Lastia in the Italian Dolomites
Diego Toigo reports about the first ascent of Mente Demente, climbed on 17 August with Francesco Fent and Alberto Maschio up the NW Face of Spiz della Lastia, Agner, Dolomites