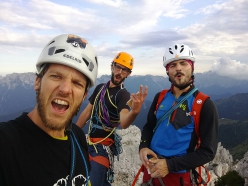 Diego Toigo, Alberto Maschio and Francesco Fent on the summit of Spiz della Lastia in the Dolomites after the first ascent of Mente Demente (750m, VII+ R3/IV) on 17/08/2018
Photo by archivio Diego Toigo 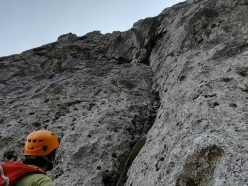 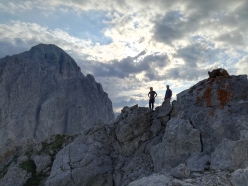 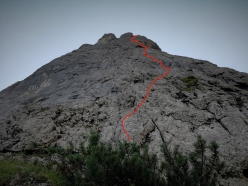 Diego Toigo reports about the first ascent of Mente Demente, climbed on 17 August with Francesco Fent and Alberto Maschio up the NW Face of Spiz della Lastia, Agner, Dolomites

Taking advantage of a brief high pressure system during this stormy August on 16 and 17 August Francesco Fent, Alberto Maschio and I established a new route up the beautiful NW Face of Spiz della Lastia.

It is the first peak you encounter on the left as you enter Val di San Lucano and look towards the giants on the Agner side of the valley. The first rock climb up this mountain was established by the usual, great Ettore Castiglioni, while Lorenzo Massarotto added 5 new routes between 1981 and 2004.

Since the approach to Livinal de l'acqua is neither short nor easy, evidently the rock face had to be extremely beautiful in order for Mass return so often. At least, that’s what I thought every time I looked at the peak from the Pale di San Martino. I’d wanted to climb there for some years now, but until this year I never really got the chance.

Mente Demente climbs up the righthand side of the face, between the routes Anita (Massarotto-Salvestro 1984) and Massarotto - Bellin - Sansonne - Zonta (1992). The start is situated on the long grassy ledge that cuts across the wall, next to the lone larch tree (orange peg at the base).The climb follows a sequence of cracks and beautiful pocketed slabs towards the obvious crescent-shaped roof about halfway up the wall, here it shares the 1992 Massarotto route 1992 for a pitch and a half before continuing off independently. It provides some very beautiful climbing up pocketed slabs and excellent rock quality throughout, especially in the corner on pitch two and the spectacular pitch six. Seven pegs and a sling were left in-situ, for a repeat take a double set of Friends up to BD #2 and # 3, a selection of slings and some pegs.

For a complete report check out: www.rocciatorifeltre.it