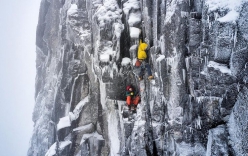 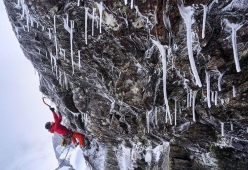 Greg Boswell on the steep start to his New Age Raiders on Church Buttress at Bidean nam Bian in Scotland, first ascended in December 2020 with and Callum Johnson
Photo by Hamish Frost 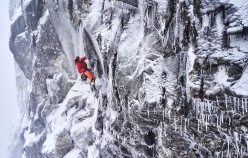 After what has been described as an unusually slow start, winter climbing in Scotland kicked off with a bang in early December with significant first ascents at the hands of Callum Johnson and Tim Miller who established The Flying Fox (VIII,8), Never Never Land (VIII,8) and The Flying Fox (VIII,8) on An Teallach, Beinn Eighe, Dave MacLeod and Iain Small who established Nevermore (VIII,8) on Ben Nevis, and Tim Miller and Jamie Skelton who climbed Metamorphosis (IX,9) on the same mountain.

Not to be left behind, last Tuesday Greg Boswell and Callum Johnson added a notable new route on the Church Buttress of Bidean nam Bian called New Age Raiders. Graded an impressive IX 9, this follows very steep terrain, hitherto unclimbed in both winter and summer.

Writing to planetmountain.com, 29-year-old Boswell recounted "Last week I suggested to Callum and Hamish that we check out Church Door Buttress, as it's got lots of potential and the conditions looked favourable for some interesting routes up there. After some failed starts on other new lines, we eventually jumped on the super steep and 3D looking terrain on the right side of the Buttress. This turned out to be an awesome plan C choice and was home to some steep and technical climbing."

"The route itself was crazy steep off the ground, then it turned into a world of protruding blocks, overhangs, steep grooves and false looking cracklings! We did the line in two pitches, with the first and the start of the second being tricky. It forced us into a respectful approach, due to the iced up cracks and hard won protection on the day. We needed to put our heads in the slow and steady mindset, as things could've got risky if we'd rushed things due to the lack of bomber protection as we moved higher up the buttress. All in all it was an awesome contingency plan and it was fun to salvage the day with such an interesting and steep route."

"The route was named on the same theme as the rest of the neighbouring routes, relating to the Indiana Jones movies. We settled on the grade of IX 9 and it's fun to see and do new lines through such steep and imposing terrain. Hopefully there'll be some more like this to do soon."

16.01.2018
Boswell and Robertson discover their Holy Grail in Scottish Highlands
Greg Boswell and Guy Robertson have climbed a significant new route on Buachaille in Scotland called The Holy Grail IX/10.