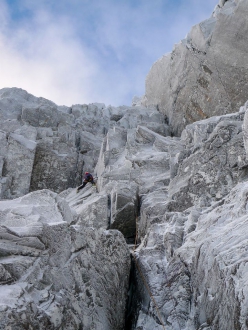 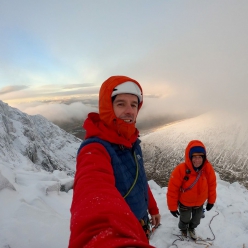 Scottish climbers Dave MacLeod and Iain Small have made the first ascent of the mixed climb Nevermore on Ben Nevis, Scotland.

The significant new addition comes as a surprise as it is located not on a remote part of the Ben but on Number Five Gully Buttress, above the long traverse at the start of the famous Ledge Route often used by beginngers to reach the top of the mountain. Equally unexpected is the fact that the line had never been climbed before in summer.

Writing to planetmountain.com, 42-year-old MacLeod stated "It's a good line that a lot of folk had an eye on. It gets the sun later in the season and tends to strip so its not that often rimed up. It really is surprising it's not been done in summer, especially as there are other routes just to the left."