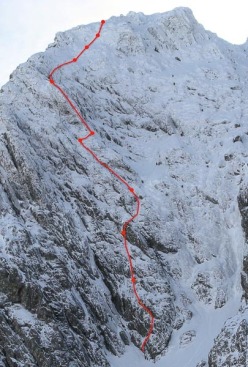 The Orion Face and the line of Shooting Star (VI,6, Robin Clothier and Richard Bentley, 02/2013)
Photo by Simon Richardson

Ben Nevis continues to be the breeding ground for important new winter climbs. On 22 February the highest mountain in Great Britain - and the symbol of British winter climber - was enriched with Deadly Presence, a difficult line climbed by Iain Small and Doug Hawthorn which can be considered "a natural continuation to Appointment with Fear" high on the Observatory Buttress. The name of the line provides important indication as to the seriousness of this VIII,7 route described by Small as "a contender for the leanest ice pitch I’ve ever climbed."

While Deadly Presence is certainly an important addition, a second route has understandably made greater waves: Shooting Star up the famous Orion Face. In practice, this is a weaving 500m route climbed by Robin Clothier and Richard Bentley which uses sections of 9 existing routes and two pitches of virgin terrain. On Simon Richardson's site Scottishwinter.com Clothier reports "I’ve been climbing all over the Orion Face and its headwall for over 30 years but I’ve never seen conditions as good as this before. We graded it VI,6 but make no mistake, it is a very serious route!"

We asked Richardson for insight about this latest addition, about this face and the very particular conditions: "Yes, Shooting Star is rather special. It is a very Scottish type of route that relies on a layer of snow-ice to form over the cliffs. Even on Ben Nevis this is quite rare - it needs the snow to be carried onto the mountain with a certain wind direction. The wind itself cannot be too strong and then there needs to be a brief thaw and refreeze, preferably over three or four cycles.

The Orion face is the most 'alpine' of the Scottish cliffs. It is one of the highest winter cliffs in Scotland (400m high) and leads straight to the summit of our highest mountain. The most popular line - Orion Direct (V,5) is not too difficult, but its position, length and status means that it is one of the most prized Scottish winter routes. Some years it sees few ascents, but this season conditions have been superb, and it has had multiple ascents each day over the past few weeks."