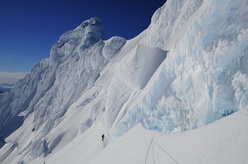 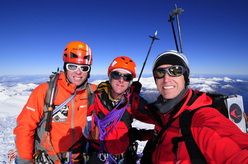 At the start of April the Germans Robert Jasper, Jörn Heller and Ralf Gantzhorn reached the West summit of Monte Sarmiento (2145m) via a new route up the North Face.

On 04 April 2010 a small German team comprised of Robert Jasper, Jörn Heller and mountain photogher Ralf Gantzhorn succeeded in climbing a new route up the virgin north face of the Monte Sarmiento, reaching its west summit. Located in Patagonia's inhospitable Terra del Fuego, the peak is rarely ascended and some 30 expeditions have failed in the past, giving an indication as to the region's difficulties. In fact, prior to their ascent the team had to dig deep just to reach the base of the mountain proper: after having arrived at Ushuaia in March they spent 11 days sailing through the rough waters around Cape Horn and making their way up north to the Magellan Strait, to establish their base camp at Caleta Escandallo. Finding a way through the thick vegetation and the glacier proved highly complicated, and bad weather soon brought the first three attempts to an abrupt, premature end.

On 1 April the winds changed direction and they set off once again, only to dig themselves into a snowhole half-way up the mountain in total white-out conditions. But the three struck lucky and at 2 am Jasper noticed the first star appear through the clouds. They quickly melted snow, ate some food and set off once again, reaching the summit at midday in perfect weather. Their climb covered a distance of circa 20km with 3000m height gain and difficulties up to WI4+. and the roundtrip from their boat at Caleta Escandallo to the summit and back again required 39 hours. They named their alpine-style ascent "La Odisea de Magellanes" to honour the 18 century adventurers who first ventured into this area.

Jasper recounts: "the whole expedition was a real adventure. The Terra del Fuego has always interested me from a historical point of view and I've always wanted to go there ever since meeting Steven Venables, who reached the West Summit via the South Face in 1995 together with John Rosekelley, Tim Macartney-Snape during an expediton led by Jim Wickwire. Every region poses specific difficulties and while Monte Sarmiento is much lower than the peaks in the Himalaya, the weather is extreme, with raging storms, intense cold and incessant rain. Add to this the fact that it's pure wilderness, there's simply nothing remotely like this in Europe. The vegetation is so thick it's like a brick wall and there are so many dangerous swamps that you could disappear into that we needed a couple of days just to fight our way through the jungle. The freezing cold and the vertical, pressed snow proved demanding and finding a route though the massive ice formations proved difficult, but we managed and in the end we were really lucky with the weather: the unexpected window lasted 20 hours and gave us just enough time to get back safely. I suppose it's a question of being in the right place at the right time, but despite the perfect blue skies we couldn't really enjoy the summit as we were constantly worried about the weather closing in on us in a matter of minutes. Which it did, but by then we were back safely. Yes, a real adventure which came to an end on 10 April at Puerto Natales after another week sailing back to civilisation."