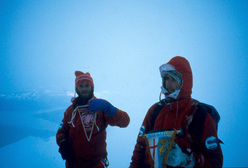 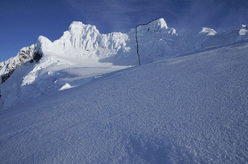 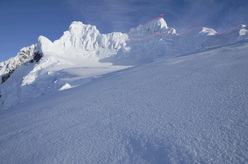 PORTFOLIO / gallery Portfolio: The North Face of Monte Sarmiento and the 1986 first ascent by the Ragni di Lecco

Contrary to what we published previously, the ascent by the Germans Robert Jasper, Jörn Heller and Ralf Gantzhorn is not the first ascent of the North Face of Monte Sarmiento, as this had previously been climbed by an Italian Ragni di Lecco expedition which on 24/12/1986 reached the West Summit of Sarmiento via the North Face.

Render unto Caesar the things which are Caesar's. The first ascent of the North Face of Sarmiento goes to the Ragni di Lecco. Why this statement? Because unfortunately mistakes sometimes happen, and for this reason we want to apologise with our readers and the Ragni. In this case we need to return to the news, published a few weeks ago, about the ascent to the West summit of Monte Sarmiento via the North Face by the Germans Robert Jasper, Jörn Heller and Ralf Gantzhorn, which we mistakenly reported as being the first ascent of the North Face.

In truth this beautiful and difficult face had already been climbed back in 1986 via an almost direct line by a Ragni di Lecco expedition led by Gigi Alippi which included Salvatore Panzeri, Lorenzo Mazzoleni, Pinuccio Castelnuovo, Bruno Pennati, Clemente Maffei, the camermen Salvatore Fantozzi and Luciano Bovina and the doctors Gian Maria Confalonieri and Franco Baravalle. The team reached the West summit  on 24 December 1986 with Salvatore Panzeri, Lorenzo Mazzoleni, Bruno Pennati, Pinuccio Castelnuovo and Gianmaria Confalonieri.

As can be seen from the two route lines in the photos on the left, the recent German expedition opted for a long traverse along the ridge and, after having crossed the North Face, reached the hardest section of the route which the Ragni climbed in 1986 to then reach the West summit.

As first ascentionist Salvatore Panzeri wrote: “After having seen the fantastic photos by Robert Jasper of their new route all I can say is that they carried out a beautiful ascent and experienced an amazing adventure, one of those which Monte Sarmiento can offer.” Salvatore “Tore” Panzeri then added: “One of my expedition companions, to be precise Gigi Alippi the expedition leader, compared Jasper & Co's ascent to a sort of different approach to the real difficulties, before following our 1986 line of ascent step by step. Pinuccio Castelnuovo, another first ascentionist and now regional president of the Italian Olympic Committee, agrees with our “chief”. I cannot but follow my adventure companions and it's clear that the two routes climb the same zone where Sarmiento reveals its best defences. Many years prior to us, if I'm not mistaken in 1974, an expedition by the CAI  Bardonecchia followed the same line but for various reasons stopped on the crest between the two summits, so no one did anything new apart from adding a fantastic adventure to their personal life experience. We came across the same difficulties which the Germans described, in particular I was completely put to the test by the final summit mushroom which I managed to climb. Looking at the photos on your site I'd say that the only difference were the weather conditions: we would have paid to have the sky they had.”

Panzeri concludes that Jasper's ascent “took me back to those years to relive those fantastic days in the Terra del Fueco and in the photos see all those who are no longer with us: Bruno Pennati, Franco Baravalle, Clemente Maffei (Gueret), Lorenzo Mazzoleni." It's with them too that we wish to apologise.