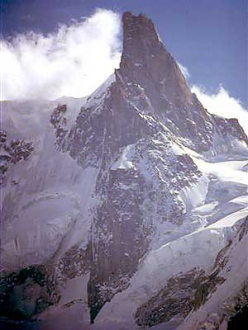 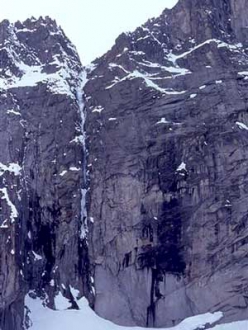 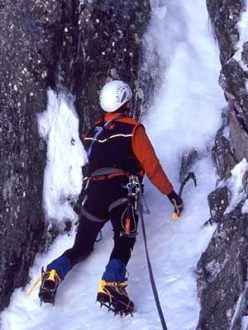 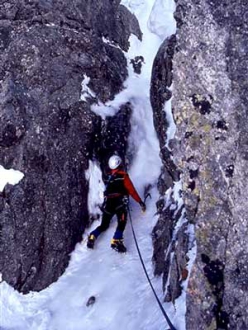 Ezio Marlier has sent us information about two recent mixed ascents in the Mont Blanc massif which, in some respects, differ from the norm.

The first concerns the repeat of Goulotte Nord on the Dente del Gigante, together with Arnaud Clavel. This 700m route was first climbed by Patrik Gabarrou in 1978 and graded IV-5. Marlier believes this to be the second repeat, possibly because of the arduous walk-in. The second news item is the first ascent of Stop the War (IV-6c-5+), which climbs a steep 250m gully on Aiguille de la Brenva.

"Just one other party had climbed the route before my ascent with Arnaud Clavel. This is strange since it's one of the most beautiful and wild routes in the Mont Blanc massif. The route is probably considered much due to the complicated walk-in.

Access. Normally one descends to Requin and ascends the Periades glacier. Arnaud and I found a much faster way of getting there: reach Breche Pouiseau at the lowest point of Gengiva, then traverse right beneath the north face to reach an enormous serac to the right. Two abseils (the first off an enormous block, the second off an ice screw) and then a quick 10 minute ascent lead to the base of the route. Calculate 2 hours from Rifugio Torino.

"Max climbed the first pitch, entirely on rock with difficulties up to 6c. Three bolts protect these 45m. I then led the second pitch, overhanging in places with one bolt at the start, both technically and psycholoigcally demanding because there's no pro for a 10m section and the snow is thin. This leads to a narrow gully (60cm wide) where we belayed (40m, 5+). We then climbed this extraordinary 60m gully, which has one 10m 85/90Â° section, 4+. Belay. Two further pitches lead to the Breche (100m - some 60/65Â° sections). We then descended along abseils placed to the left of the line of ascent.