Brette Harrington making the first ascent of 'Marc-Andre’s Visión' up the East Face of Torre Egger in Patagonia, with Quentin Roberts and Horacio Gratton in February 2020.
Photo by archive Brette Harrington 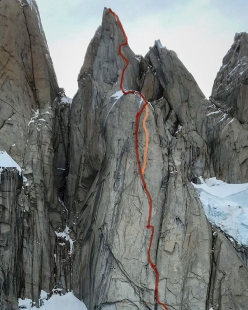 The line of 'Marc-Andre’s Visión' up the East Face of Torre Egger in Patagonia, completed in February 2020 by Brette Harrington, Quentin Roberts and Horacio Gratton
Photo by archive Brette Harrington

The video by Brette Harrington documenting the first ascent of Marc-Andrés Vision, a climb on Torre Egger in Patagonia imagined by Marc-André Leclerc and completed in 2020 by Harrington, Quentin Roberts and Horacio Gratton.

While rappelling from the route Titanic during the first winter solo ascent of Torre Egger in 2016, Marc-André Leclerc spotted an unclimbed line on the mountain’s East Face.

The Canadian shared the photos with his partner Brette Harrington with the aim of attempting the line together, unfortunately however fate decided otherwise and after Leclerc's untimely death in 2018, Harrington travelled to Patagonia at the start of 2019 with Quentin Lindfield Roberts to explore the series of cracks on the lower half of the wall.

After 13 pitches and at circa height the two were forced to retreat but they were back the following year, this time together with Horacio Gratton, to complete the line.

The new route follows the entire lower section climbed in 2019, then joins Titanic to reach the summit, and was called Marc-Andre’s Visión. Here is the documentary of the first ascent.