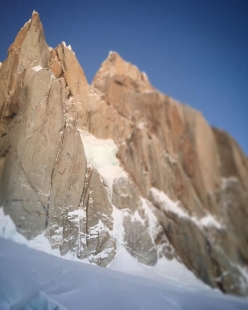 Canada’s Marc-André Leclerc has taken the mountaineering world by storm with a fast, first solo winter ascent of Torre Egger in Patagonia. First climbed in 1976 by the Americans Jim Donini, John Bragg and Jay Wilson, the first winter ascent of this 2685m high peak was carried out in 2010 by Swiss alpinists Stephan Siegrist, Dani Arnold and Thomas Senf. Until now no one had climbed Torre Egger alone in the coldest season.

Leclerc attempted to solo Torre Egger on 10 September 2016 but after a bivouac circa four pitches below the summit, the Squamish based alpinist was forced to retreat the next morning due to snowfall. According to details published on Patagonia Vertical, Leclerc returned up the valley and bivied in the Niponino camp on Thursday night, while on Friday he moved his camp to the glacier below the east face of the mountain.

Setting off at 2:45am on Saturday, Leclerc climbed circa 300m of new terrain to the right of the line chosen in 1980 by the Italians Bruno De Donà and Giuliano Giongo before following the line of his previous attempt, namely the "Winter link-up" line that leads to Titanic at half height. This involved climbing below a threatening serac - his first time ever - and a long mixed pitch (M5 A1), while on the headwall he soloed the majority of the climbing. He changed into rock shoes for some sections and back into boots and crampons higher up, resorting to aid where necessary. He summited at 6pm and after down climbing the first pitch abseiled off the edge of the headwall using Abalakov v-threads. This direct descent enabled him to return to the safety of his tent at 23:00, 21 hours after having set off.

Leclerc burst onto the international scene in February 2015 with his impressive solo of the Corkscrew link-up on Cerro Torre. In January 2015 together with Colin Haley he traversed from South to North the peaks Cerro Torre, Torre Egger, Punta Herron and Cerro Standhardt, while in October 2015 he made another audacious Patagonian solo linking up Tomahawk with Excocet on Aguja Standhardt. Just to put things into context: his latest ascent has been described by climbing partner Colin Haley - who knows a thing or two about climbing in Patagonia and who in January 2016 made the first solo ascent of Torre Egger - as follows "This ascent really blows me away. Marc-André is quickly leaving everyone else behind in this realm of climbing…"