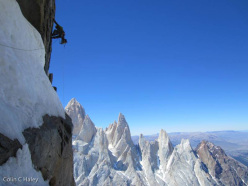 America’s Colin Haley and Canada’s Marc-André Leclerc have pulled off what Patagonian expert Rolando Garibotti has described as "a humungously big coup" in the Cerro Torre group, namely the traverse from south to north of the principal peaks in this massif, i.e. Cerro Torre, Torre Egger, Punta Herron and Aguja Standhardt. The same four peaks that Garibotti and Haley were the first to link in early 2008 with their famous Torre traverse, but this time climbed in the opposite order and via different routes.

With a big weather window forecast, Haley and Leclerc reached the Niponino camp on the 17th of January, then set off at 4.00am to cross the Standhardt Col, continue past Filo Rosso and make their first bivy just below the Col de Esperanza. On the 19th they started early once again to climb the Ragni route and reach the summit of Cerro Torre shortly before midday. From here they made 3 abseils down the Ragni route, set up a tent and waited for shade to arrive and continue at about 18.00, down the North Face of Cerro Torre to make their second bivy just above Col de la Mentira. The next morning they abseiled to this col and started up the South Face of Torre Egger via Venas Azules, first ascended in December 2011 by the Norwegians Bjørn-Eivind Årtun and Ole Lied. After having climbed just over 5 pitches they realized the route was not fully in condition and made an abseil to traverse across to the American route and, later, traverse further right to finish up the East Pillar in last light. They bivied comfortably just below the summit of Torre Egger and on the 21st descended down the North Face to then ascend Punta Herron easily from the south. Col dei Sogni between Punta Herron and Aguja Standhardt was reached at 1pm after having descended down Spigolo dei Bimbi, and Leclerc added three new pitches from Col dei Sogni to join El Caracol. Six pitches later, at 11:10 pm, Haley and Leclerc stood on top of Aguja Standhardt, their fourth and final summit. The two then proceeded to abseil through the night and this proved relatively straightforward, also because Haley had done this descent five times previously. Their timing proved spot on: the weather was nearly perfect for 4 straight days and only during the last abseils to the glacier did the wind gusts finally get strong.

While Haley has a string of important Patagonian successes to his name, it is interesting to note that 22-year-old Leclerc is a relative newcomer to Patagonia, having previously climbed only El Mocho, next to Cerro Torre. The two had never climbed together yet at the end of the traverse Haley described his talented new partner as "a veteran of climbing on the Torres." As to the difficulties of this ascent, Haley told Planetmountain.com, "I think that this traverse was pretty equal in difficulty to the original one that I did with Rolo."

Writing on Facebook, Haley also gave insight about the name of the route: "We are naming our climb the Travesia del Oso Buda. "Oso" for Bjørn-Eivind Årtun ("Bjørn" means bear in Norwegian, "Oso" means bear in Spanish), and Buda for Chad Kellogg. This traverse was first envisioned by Bjørn-Eivind, and we made plans to attempt it together in 2011. The first attempt was made by Bjørn-Eivind and Chad in early 2012 - Bjørn-Eivind was killed by rockfall a couple weeks later in Norway, and Chad was killed by rockfall about one year later on Cerro Chaltén (Fitz Roy - Ed.). They were both amazing, inspiring climbers and wonderful people, and I wish I could tell them that Bjørn's dream has come true."