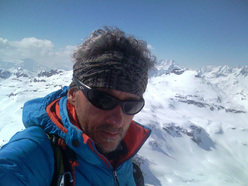 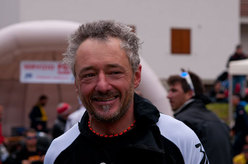 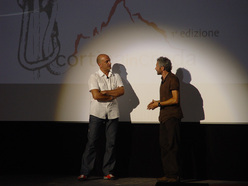 Lorenzo Scandroglio has passed away after fighting for his life for two weeks at Maggiore hospital in Novara. Born in 1969, the 52-year-old devoted his entire life to his passions, to the mountains, to writing (but we should also say culture), travels, his family.

Born in Gallarate, Scandroglio was a writer, journalist, translator. He worked for the newspaper Il Giornale, and at the start of the new millennium was the historic editor in chief of the climbing magazine Alp. Furthermore, he was one of the founders of Letteraltura Festival, one of the most interesting and proactive festivals to revolve around mountain literature and culture. He loved ski mountaineering (indeed,  for many years he was planetmountain’s correspondent for skimo comps). And he loved writing. And he also loved to discuss everything, passionately. From mountaineering to politics. With him one could always discuss anything. And also to share a glass of wine, have a laugh.

Lorenzo was always looking for something, trying to understand, to live his life to the full. Perhaps this is why, at some point, he had chose to run a mountain hut, in order to experience the mountains even more. For him and for Cecilia, his partner, the adventure of managing the Miryam hut began at 2,050 meters in Val Vannino, a side valley of upper Val Formazza, in the province of Verbano-Cusio-Ossola. More recently he became hut warden of the Città di Arona refuge at 1,750 meters in the Alpe Veglia and Alpe Devero Natural Park.

He was active, Lorenzo. By all accounts, and in everything that he did. And he knew how to "see" others, those who spent time with him, those he met. It is no coincidence that he was part of the Mountain Rescue Squad. And that he never ceased being a cultural animator in the true (and disinterested) sense of this term.

We will remember Lorenzo and his great love for the mountains. We will remember his books. And his translations. Like the unmissable "When men and mountains meet" by John Keay. Those adventures, that story about the early explorers of the Western Himalayas, somehow suits Lorenzo to a tee, as he constantly searched for what lies beyond the horizon. And yes, even if we hadn’t been in touch for a while, with his death we’ve now lost a bit of ourselves, of our history. Ciao Lorenzo

02.05.2011
Mezzalama Trophy 2011. The race, winners and a renewed competition
On 1 May 2011 the XVIII Mezzalama Trophy was won by the international team comprised of Spaniard Jornet Burgada and the Frenchmen Bon Mardion and Blanc. The women's event was won by Pellissier, Pedranzini, Martinelli. The report and excitement of the great ski mountaineering marathon on Monte Rosa, by Lorenzo Scandroglio. Portfolio by Marco Spataro.