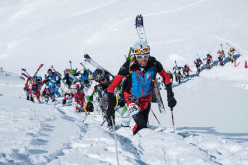 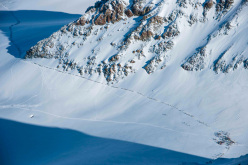 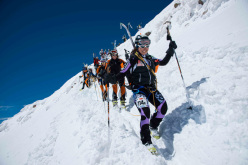 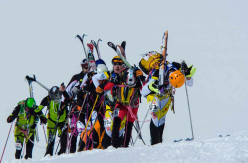 After having been postponed by a week due to bad weather (more than a meter of snow fell in the meantime, covering all black ice sections and closing the crevasses), the Mezzalama Trophy took place last Saturday in what turned out to be a picture-perfect day. Ideal snow conditions down the descents (fresh powder at 3600m and a hard pack lower down) and the possibility of skiing to within 50m of the race finish resulted in faster times compared to 2011 despite the variations to the course. These, at Refuge Quintino Sella and the Lyskamm Nose, did not however change the length of overall race compared to the 2011 edition.

The Italian Courmayeur military team comprised of Manfred Reichegger, Matteo Eydallin and Damiano Lenzi immediately took the lead and they were followed closely by their compatriots Michele Boscacci, Pietro Lanfranchi and Lorenzo Holzknecht. On their heels was the hot-favourite, Franco-Spanish team comprised of Kilian Jornet Burgada, William Bon Mardion and Matheo Jacquemoud, but the Spanish champion was not on his usual form; he struggled throughout the first ascent and had to be helped by his companions.

At the summit of Mt. Castor (4226m) the race positions remained unchanged and this was reached in record time of 2:30:30, four minutes faster than the previous 2009 record. During the ascent up the Lyskamm Nose (4100m) the Franco-Spanish team, driven by young Jacquemoud, overtook Boscacci, Lanfranchi and Holzknecht and during the long descent towards Gressoney the international trio even set their sights on Reichegger, Eydallin and Lenzi. But these, after the technical Canalino dell'Aquila section, managed to increase their lead, reaching the finishing line at Gressoney-La-Trinité (1650m) in an extraordinary 4:16:37, a minute faster that Jornet Burgada, Bon Mardion and Jacquemoud and 12 minutes ahead of Boscacci, Lanfranchi, Holzknecht.

In the women's competition the favourites Gloriana Pellissier, Mireia Mirò and Laetitia Roux were practically knocked out during the first ascent to the Rosa Plateau as multi-Mezzalama champion Pellissier found the going tough. The athletes from Valtellina Laura Besseghini, Raffaella Rossi and young Elena Nicolini made the most of these difficulties and took the race into the own hands, maintaining the lead all the way to the finish.

There are four important notes worth mentioning after analysing the ranking: firstly, the extraordinary comeback of Switzerland's Florent Troillet who teamed up with fellow countrymen Yannick Ecoeur and Martin Anthamatten, sixth and evidently on form for the Patrouille des Glaciers 2014. Secondly, Pietro Broggini's debut: in his first Mezzalama race the former youth champion placed an outstanding 14th. Thirdly, the crisis in the women's event which, despite some positive news (in the case of young Nicolini), was marked by far fewer female athletes. And fourthly, the 300 limit set for security reasons whittled down to 261 due to last-minute date change from 27 April to 4 May, meaning that 783 ski mountaineers set off from Breuil, of which only 229 crossed the finishing line at Gressoney.