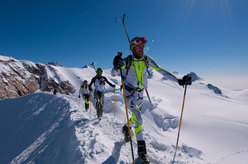 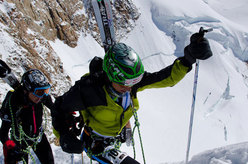 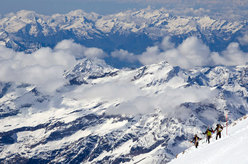 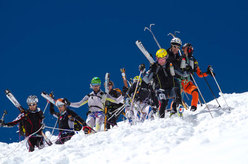 Mezzalama Trophy 2011. The race, winners and a renewed competition

On 1 May 2011 the XVIII Mezzalama Trophy was won by the international team comprised of Spaniard Jornet Burgada and the Frenchmen Bon Mardion and Blanc. The women's event was won by Pellissier, Pedranzini, Martinelli. The report and excitement of the great ski mountaineering marathon on Monte Rosa, by Lorenzo Scandroglio. Portfolio by Marco Spataro.

Yesterday's was a renewed Mezzalama Trophy. In step with the times, more difficult, even longer (45km and 3000m height gain) and more technical than ever before. The route change on the Lyskamm Nose added a touch of much-needed modernity, in particular the steep 45° ascent gully which leads to the start of the Sella Ridge where the teams then descended to the Noes and continue on to the slope which leads from Colle del Lyss to the Gnifetti and Mantova mountain huts. The weather was great and the competition even better, with a series of exciting duels for leadership. If you just examine the control sections then you wouldn't notice anything because these were always reached first by the international team comprised of Kilian Jornet Burgada from Spain and William Bon Mardion and Didier Blanc from France. But those who, like the Planetmountain team, were focussed on the entire route, know that at least two coup d'etat took place. This would have been a fantastic uprising seeing that the Spanish-French team was hot favourite and the conspirers certainly hadn't been tipped for the top podium position. Perhaps one step lower, yes, for silver, but not gold.

The defending champions, the Italian Military Sport Team, never took the lead despite believing victory to be within their grasp. That is, at least until the Castore West Face, when the cold (the shade and the early hour left their mark) and the leaders sprinting away demolished the motivation of Damiano Lenzi, Matteo Eydallin and Denis Trento and inducing them to abandon the race. The 2009 time couldn't be beaten with this longer route on slower snow and a final section which needed to be completed on foot. In Courmayeur though they certainly wouldn't have been unhappy had "their boys" won again.

But let's return to the leaders, to the heart of the race. At the first control station at Colle del Breithorn the team which beat the trail, and then won, was ahead of Seletto, Pedrini, Lanfranchi by 45 seconds. Over on the West Face, while the cold, fatigue and uncertain progression began to leave their mark on the athletes' face , the ATK team attempted its first attack, but just when it seemed as if they'd overtake a crampon became unstuck and positions were held once again. A short while later on Castone (4226m) they had reduced the margin to just 11 seconds. And then, after an extenuating race for victory down the 2500m final descent, Alain Seletto (one of the best skiers in this white climbing-skin circuit) gave it a go. For a brief moment it seemed as if they'd manage to overtake, but pride took the upper hand and the Spaniard Kilian Jornet Burgada and his two French companions William Bon Mardion and Didier Blanc kept ahead.

The final meters unfolded like this: despite the poor expectations prior to the competition in this year marked by little snow, the final section which needed to be covered on foot was only 1 kilometer long. But then, almost at the gates of Gressoney, athletes needed to take off their skis and and put them back on a couple of times to make the most of the isolated 500m strip of snow which, with skis on, could be covered far quicker than on foot. With their hearts about to explode and their closest rivals hot on their heels, Kilian, William and Didier crossed the finish line first. They didn't even have the time to look behind them. In this breathtaking race they managed to beat their rivals by a mere 18 seconds, after racing for 4 hours, 33 minutes and 58 seconds. A hair's breadth.

With this victory Frenchman William Bon Mardion also provisionally leads the La Grande Course (the international ski mountaineering championship which combines the 5 ski alp queens: the French Pierra Menta, the Italian Adamello Ski raid, Trofeo Mezzalama, Tour du Rutor and the Swiss Patrouille des Glaciers). His regularity and this victory mean that he now leaps into provisional first, ahead of Giacomelli and Holtzknecht (second at the Pierra and first at Adamello) and Kilian and Didier (winners at the Pierra but who abandoned the Adamello race).

The women's Mezzalama Trophy was dominated by the Italians Gloriana Pellissier, Francesca Pedranzini and Roberta Martinelli who, with this masterstroke, crown perhaps a career rather than their (somewhat under-par) season. Their 18th place overall (taking into account male competitors) speaks volumes about the devilishly fast pace of the strongest mothers in the ski mountaineering circuit. Their victory was never questioned by their extremely strong international rivals Mireia Mirò (Esp), Laetitia Roux (Fra) and Nathalie Etzensberger (Sui).

The fact that teams are comprised of three elements (unique to the Mezzalama and Patrouille desl Glaciers) means that the cards are often mixed and, in this case, this season's successful Mirò – Roux team failed to work well with the Swiss World Champion and the cold which made the Spaniard tremble on the Castore ridge. Having said that, their second place is fantastic and enabled Mireia and Laetitia to return home as joint leaders for all of summer and autumn, until 2012 when the Patrouille des Glaciers will decide once and for all who the strongest ski mountaineers on the great classic race courses are in the seasons 2011-2012.

An emblematic image of this Mezzalama is that of Jean Pellissier, the multiple champion who tied in with two younger athletes, Guido Giacomelli and Lorenzo Holtzknecht. Ski mountaineering advances at the speed of light and the veteran is beginning to feel the burdon of time. He is still extremely quick, but this didn't suffice. Staying ahead of the game is even harder now, keeping up with the youngsters is even more difficult. And so, while descending from Castore, Jean was exhausted by the cold and rhythm and he tried to stop to drink a cup of hot tea at the refreshment point. But the youthful exuberance couldn't wait, they raced away and he spilt his tea all over himself. And he, sweet and accustomed to suffering, set off in his mild-manner, trailing behind but indestructible. In the end their team placed 7th, almost 20 minutes behind the winners.

Of the 400 teams that started, only 254 reached the finishing line. All others were stopped at the control stations or abandoned the race. This year the cut-off point for many teams proved to be at the second station at Colle del Felik. The presence of hundreds of competitors, the biting cold and the technical limits of some extremely fit but unskilled ski mountaineers all resulted in a long queue being formed on West Face of Castore, immediately before the narrow section which led to the Bergschrund. The queue was often immobile and precious minutes were lost resulting in the organisers stopping them at the Quintino Sella refuge.

In any case even the XVIII Mezzalama Trophy is already a thing of the past, epic and to be cherished, as always. And many now have their sights set on 2013.

The photos were taken by Marco Spataro.